Despite concerns and complaints raised by the other residents of the house, Iowa City officials say they have no authority to block a local man’s plans to renovate his first-floor bathroom to resemble the men’s room from Kinnick Stadium circa 1983.

“We understand that people are upset, but there is just no law against what is being planned here,” said Johnson County zoning official Fred Akename. “Mr. [Mark] Kinzie is entitled as the legal owner of the property to renovate the bathroom within reasonable limits, and there is nothing in the law that forbids trough urinals or bare concrete walls from being installed in any dwelling or farm outbuilding in this county.”

The renovation made news weeks ago when Mr. Kinzie, inspired by another notable Kinnick recreation in the area but working on a much more constrained budget, decided to recreate his the part of the stadium that he most vividly recalled from his childhood.

“When my dad took me to Kinnick as a kid, it was just an overwhelming sensory experience,” said Mr. Kinzie. “I remember plunging into this sea of humanity, smelling the popcorn, emerging into the bright green of the stadium, hearing the band, the roar of the crowd. And then I remember having to pee in the second quarter and being introduced to a whole new world.”

Kinzie described the “mind-etching tableau” that was the Kinnick men’s room in 1983. “My dad was really into the game, so he told me to go alone, which was probably a mistake. I made my way to this concrete room and found myself face to urinal with a very intimidating 12-foot aluminum trough that appeared to be designed for barn animals. There were about fifty guys it seemed waiting for me to pee, and all these cigarettes and mysterious little bottles littering the trough and the ground around it. Then the smell hit me and – ye gods, the smell – at that moment a special circuit in my brain was created to record that sensation. I don’t even remember who we played that day, but that men’s room, I will never forget.”

When asked why he would like to recreate that memory over any other related to his Hawkeye fandom, Kinzie admitted that his wasn’t a common nostalgia. “I know it may seem a bit ‘out there’, but I think there’s a Proustian sense-memory kind phenomenon going on here, know what I mean? It all clicked for me when I took this family vacation and had to stop at an old truck stop in the country. They had a trough urinal just like the one in Kinnick, and suddenly all these memories – of the team, my dad, the weather that day – rushed back to me. I guess you could say the urinal cake at that truck stop was my madeline.”

“Plus I learned that bricks, glass, masonry and all that stuff is really expensive, but old aluminum trough urinals are quite affordable. In fact, I bought the one from that very truck stop for just $300. It made the trip back from New Mexico a little rough on the family, but I think it will be worth it.”

The complete renovation will involve removing floor and ceiling tile as well as all current amenities in the bathroom, and coating the room with an inch-thick layer of concrete. The current ventilation and lighting system, which features heating and cooling fans as well as antique porcelain vanity lights, will be paved over and replaced with an exposed fluorescent lighting fixture. To add to the verisimilitude of the project, Mr. Kinzie has researched authentic bathroom graffiti and 1983-era liquor and cigarette packaging to ornament the area around the trough. “I’ve got some old Ballentine bottles, Seagram’s, Canadian Club … man, estate sales were a gold mine for this stuff,” said Mr. Kinzie. “Every little bit helps to recreate that sensory tableau. If only I could get some 1983-era vomit, possibly with a McRib in it, I think I would have it nailed.” 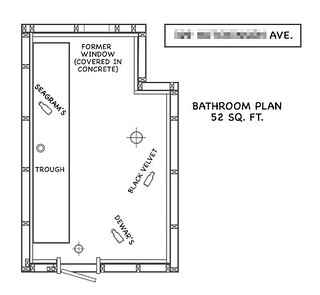 Although regulatory obstacles seem to have been cleared away, Kinzie’s family remains a formidable obstacle to his dream becoming a reality. Kinzie’s wife, Barbara, has said that the new plan would “force [her] to rethink a lot of things,” and has spent the past two weeks visiting various Johnson County governmental offices in an effort to get the proposed construction blocked. “They say it’s technically Mark’s house and he can do what he wants,” said Mrs. Kinzie. “They also said it’s a family matter and that perhaps I can persuade him to rethink his plans, but he seems dead set on it, so I don’t know…” Then, looking vaguely out a window toward her driveway, Mrs. Kinzie could be heard to mutter “I have to rethink a lot of things” a number of times before wandering away from this reporter.