When I really dislike a player, I tend to ask myself "What are they good at?"

Conversely, when I'm really starting to fall in love with someone's game, the question flips to "What are they bad at?"

You have to go through reverse criteria to make some sort of sense of what you're seeing. Anyway: Keegan Murray, please report for discussion.

I actually would rather start with the 'bad player' criteria. So, again, flipping the question to "What is he good at?"

Analysis: these are good things.

What is he bad at, then? Shit, I don't know -- nothing? What could he improve? He could bulk up. That is one thing. Ross more than noticed, too (post-Maryland game):

And what more can be said about Keegan Murray? We've fawned over him in several games this season, but we keep doing it because his play keeps warranting it. He's the biggest surprise of the season and becoming more and more indispensable with every game he plays. He finished with 12 points (on 6/9 shooting, including a trio of dunks), 5 rebounds, 2 blocks, and a steal, as well as his usual armful of hustle plays. His basketball instincts are off the chart and his ability to be be in the right place at the right time so often is remarkable, especially for a player with his level of experience (or lack thereof). Watching Keegan Murray play ball is fun, fun, fun.

We are not alone here.

"His name is Keegan Murray. He's only a freshman but this guy plays like an experienced senior. He runs the floor, makes the hustle plays, and he can straight up ball. This team has a lot of promise for the future, I'm telling you" pic.twitter.com/CJ3btI5nrf

Pretty good, but you know we can do more hyperbole.

Look I dont think its that much of an overreaction to say Keegan Murray is the next LeBron James. #Hawkeyes

1) Who would sit if he starts?

2) Does starting even matter as long as he's getting more and more minutes?

All of this said, I'm the same guy who had to restrain myself from writing a "BENCH J-BO" column when his post-surgery performances were not up to par at first. That's aged like milk.

"What's the worst swear word where you live?"

We join united tonight with Iowa against injustices in our society.

We will continue to use our voices and platform in order to take steps to improve our country. pic.twitter.com/pr4tCbjqXV

Tried to be very patient and create a good discourse in the comments, but I cannot believe a handful of y'all tried to play the "stick to sports" card as Iowa players are literally kneeling on the court one day after an insurrection occurred nine miles from where they are playing. Fran even talked about it after the game. I'm not adding anything else, but, at some point, we can't ignore what is sitting right in front of us. Commenter Iowaexport put it best:

The game is political every time we take our hats off and sing the anthem, or have an honor guard or a flyover. I didn't particularly come here to read about yesterday, but it's not like I expect you to say "So, uhh, that happened. Anyway, Michigan sure split the atom on Minnesota, eh?" and move on.

Also, this column is literally written in sections -- just skip it if you're that put off.

Thursday - Michigan State at Iowa (5): Haven't watched much of Sparty since they valiantly fought off Detroit in early December, but I hear things are going pretty goo--jk, plenty of L's. From what I've gathered based on general discourse in the Michigan sphere, this 2020-21 team is actually missing Xavier Tillman more than Cassius Winston. Luka, you know what to do.

Tom Izzo on Luka Garza: If you see him run, most of you could cover him, but he's got a heart as big as a Lion. He might not get to a certain speed, but he's at the same speed when the game starts and when it finishes.

Damn it, Izzo -- make us dislike you more!

Sunday - Iowa (5) at Northwestern: Think I am generally done wanting to watch Northwestern hoop this year. It was fun at first, but the conference will probably (?) figure it out. Both Iowa and Michigan have played them already and somehow both play them again in the next three weeks. Yay.

That is ten pure cents right there; oooh wee.

Hey, guess who is the Big Ten women's basketball freshman of the week? Iowa's Caitlin Clark wins it for the sixth time in seven weeks this season.

Want to remember this moment forever if Michigan football ever tries to be a part of my life again. pic.twitter.com/ZsSqvH8XyD

/bites tongue until it bleeds

I can... I can wait until the Michigan section.

I'm thinking Northwestern is pretty legit this year, especially when they go small. Boo Buie feels like he should be talked about 5x more outside of B1G circles

We fucked Wisconsin the fuck up on Tuesday. With no hyperbole, this was one of the most enjoyable wins of my entire life as a fan. I am struggling to find a comparison. Usually, if your team is good enough to blow out another team, it's because the other school is little. Or someone got hurt. Sometimes, there's a small part of you that just wants to see a good game and kinda hopes the other team can make it slightly more competitive.

But no, not with this guy involved.

Not an ounce. Not a dime. I wish I could play this clip before he walks into future job interviews with hopes his potential boss is cool enough to understand.

Tuesday had none of that. It had more of this:

The defense was insane. Michigan went on a 43-6 run at one point. MGoBlog:

The lead touched 40—FORTY—midway through the second half on a Chaundee Brown layup from Austin Davis, who returned for his first minutes since injuring his foot against Toledo. A few minutes prior, Brown sent the bench into a fit of hysteria with a tip-slam. Terrance Williams pretended to resuscitate a prone Jace Howard. Howard lived; Wisconsin's dignity did not. 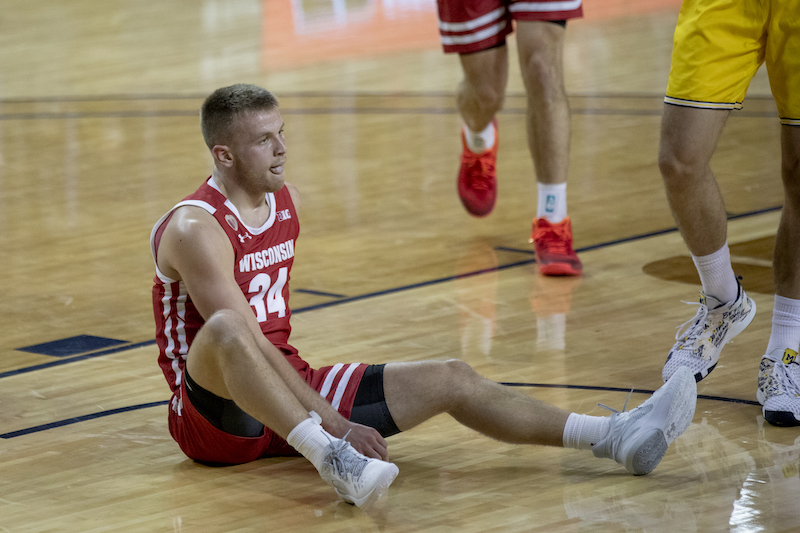 Our man Brad even tried to fight a Mike Smith flop with a semi-flop of his own as Smith was lying on the floor.

No team in college basketball has ever done this until tonight.

When I started this column (and this section), it was with the idea that Iowa would be the powerhouse and Michigan would occupy the uneven-but-solid middle tier, occasionally making noise but never anything too threatening. Both being Top 10 fixtures all season is still mesmerizing as a concept.

Alabama, we always said wed like you if you ever chose to be cool, and now you really are and we really do.

I'm dead serious. Mac Jones was a dart thrower, Najee "Hurdle" Harris was cool on and off the field, and Devonta Smith won the MVP playing WR for 2.1 quarters. I could not ask for more (other than one of my teams to be this sphere of good just one time once).

By popular demand, we have added a section to discuss basketball shoes. My initial offering...

This felt appropriate as our first selection, as Mr. Carr ruined Christmas for so many of us.

Yeah, those are not bad at all. StockX has them between $203-$493, so that seems like a realistic option.

And we're not done yet, young Bucky. Minnesota's Both Gach got called out for rocking these Kyries during the Iowa game by Stephen Bardo, who a) genuinely believed they were two different kinds of shoes, and b) shit on Gach for rocking them with some sort of "I'm old school" take.

In his defense... they really did look different. And I say that as someone who rocks Kyries and should be able to distinguish.

/kicks myself for not naming it Bill Walton's Planet Earth

Strong defensive game from Iowa tonight bumps them up to #77 in KenPom adjusted D. Hawkeyes are #1 nationally in adjusted offense. They look like a Final Four contender right now.