EDITOR'S NOTE: The views expressed in this column are Bobby's and do not reflect the views of the Go Iowa Awesome editorial board.

The original title of this column was "Wrestling Sucks," but I changed it before Ross could. (Ed. Note: ... -- Ross)

It might not suck, but it really is not cool. Especially compared to the sacred sport of roundball.

- Cutting weight is not good for you. Hoopers do not have to do this.

- Impetigo and ringworm are not good for you. Hoopers also do not have to deal with this.

- Being tall is awesome. I mean, that's what I've heard.

- Cauliflower ears are tough. And they last forever.

- On that subject, headgear isn't super fun, either.

- Neither is rolling out mats. Ohhhh, the mats I've rolled out and back up again. And cleaned. And cleaned again.

I wrestled for three years. Had some highs, had some lows. Won more than I lost, but it for sure led to some of the roughest moments of my life. Got dropped on my head once during a match, and the next thing I remember was sitting on the sideline holding a sandwich. I stared, perplexed, with no knowledge of how it got into my hands.

One time, I lost a contact during a match. I tried to call timeout before realizing that probably was not allowed. The ref looked like he felt bad for me as he tried to sort out the situation.

The last year of my 'career,' I wrestled with braces and no mouthguard. Somehow, this never backfired until my final match. For some context, this was the day of the Tuck Rule game. For you Bears fans, it was the day the Eagles came into Soldier Field and fucked up the 13-3 Jim Miller squad by double digits. I digress.

The point is those braces finally cut the shit out of the inside of my mouth. It was the only match I had that was ever temporarily stopped for injury. They gave me a Styrofoam cup, and I kept spitting and spitting until it was nearly full of my own drinkable blood. I wish they let me keep it. After, I got back out there, came back from a decent deficit via escape and some counters, and won. I even had my own move: The Bobby Drop. God damn, it was kinda great.

Wait, no -- no. There I go, doing what wrestlers do. Glamorizing the gross. 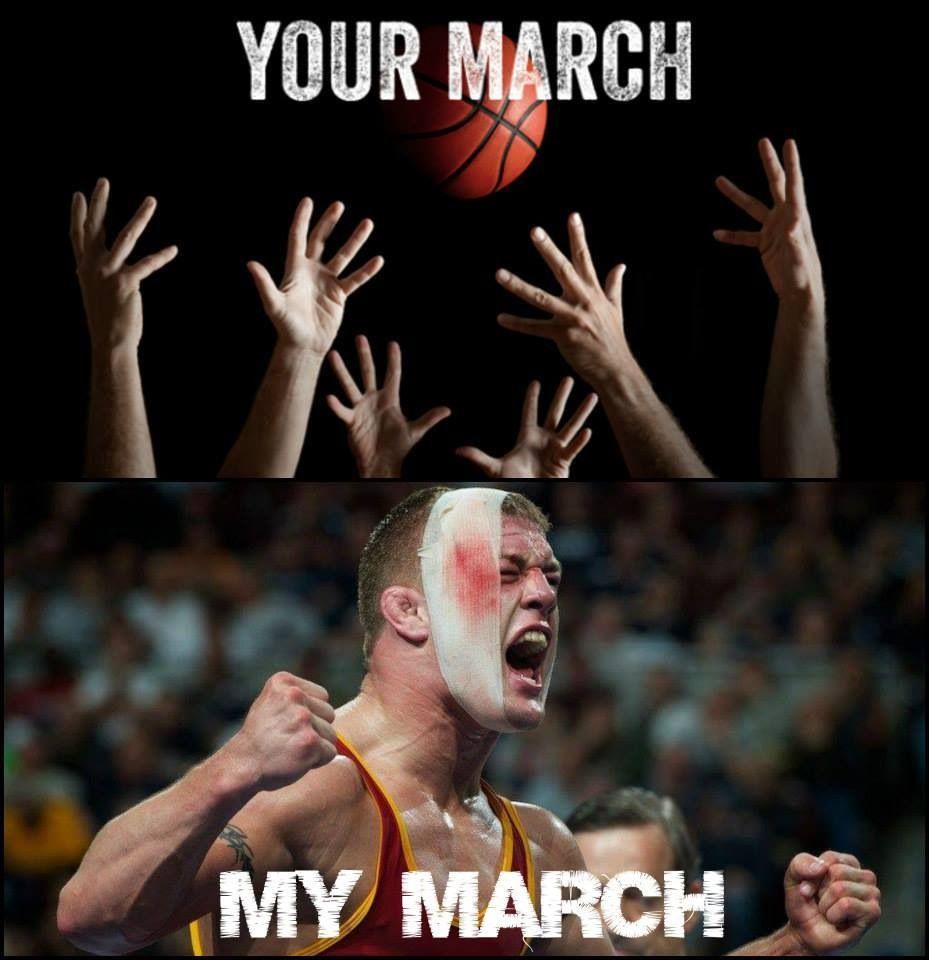 Give me a crisp, air conditioned gym over a humid wrestling balcony every. single. time.

Give me "Basketball never stops" over "Pain is just weakness leaving the body" (yes, wrestlers actually say this).

Honestly, what argument do I even need to create? The best athletes could play either sport, and they always -- always. -- choose hoops. Doesn't that say something?

Because of this, wrestlers have the lamest psuedo-superiority complex when it comes to their springier counterparts. Too often, I had to listen to petty comments about how much 'tougher' we were than our peers down below (sidebar: wrestlers are thee worst basketball players you'll ever see). These rants typically came when we were standing in a long line our underwear -- or less! -- waiting to step on a scale in hopes of losing that last 0.2 lbs standing between you and participation.

"If you pull your balls up, you can sometimes lose another half pound" - REAL QUOTE THAT WAS SAID... AND POSSIBLY MAYBE WORKED 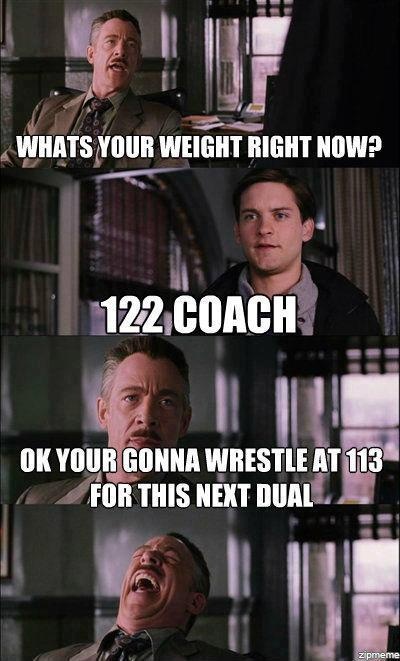 Did I mention cutting weight was and is the absolute worst? At parents' night, coaches assured our folks they'd never make us do such a thing. And, technically, they didn't, but it was one of those "You better know to do this so we don't have to actually ask you" situation. I wrestled 103 in middle school before moving to 112 as a freshman. When sophomore year came around, and I was pushing a scale busting 125, the coach told me that was totally fine, but if I wanted to see the mat, it would be much more likely at 119. Woof. 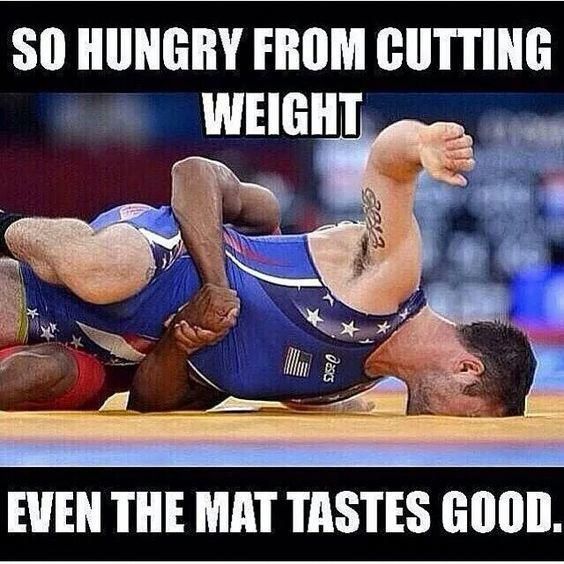 (The background of GIA is white in color, so you can't see this blurry meme's uneven white edges at the top and bottom; trust me, it's great)

So many days, in my formative years, it was no breakfast, no water all day (until practice), bagel for lunch, light dinner. Sprinting up and down stairs with sweatpants and a winter coat on (the sauna suits had been outlawed a few decades earlier). Curling up into a ball, trying to squeeze out every last ounce of perspiration like we were ratty old towels. Going to the bathroom. Doing... other things. Being so excited to go to sleep because a) you were tired as hell, and b) you almost always lost at least a pound overnight.

I wrestled a girl once. My actual match had concluded earlier that day, so I was kicking it in the stands in sweats with my also done teammates when my coach walked over with a weird glint in his eye. He asked if I wanted another assignment. I said no. He asked again with a little more intensity. I said "yes?" He smiled coyly.

My happiest moments were the forfeits. The lucky days the other team didn't have someone in your weight class. Because god damn, you still earned it if you were wrestling at a weight that was just slightly out of your reach. Making weight was the best feeling in the world. We always had oranges after; shitty food, too. When the season finally ended, we'd go to Old Country Buffet and eat the buffet. Remember buffets?

By junior year of high school, I had a job at a record store and was playing in a band. When I didn't sign up for wrestling, my coach -- Rudy Ruettiger's brother (yes, for real) -- pulled me out of the hallway into one of the school's camera rooms.

My first thought: there are no cameras in the camera room!

I genuinely believed murder was on the table. But, like the man I was not, I looked him in the eye and told him it was the end of the line for me. He probably did some minor coaxing before eventually caving.

It was one of the best decisions of my life.

And sure, I learned discipline, hard work, accountability, and there was serious camaraderie with my teammates that rivaled few other bonds even to this day. But you know what else has that? Literally every other sport.

Once, for The Daily Iowan, I engaged in a point-counterpoint where I argued Cael Sanderson was better than Dan Gabel. For the uninitiated, Sanderson never lost a college match. It seemed like an alright position to have. Friends, that article had more "HOW DARE YOU" comments on it than everything else I did in my tenure combined.

So, yes, I did enjoy moments within moments (wrist ringworm not withstanding). I am proud of Iowa wrestling for being as great as they are. I've watched them inside Carver and outside at Kinnick. It is not an easy sport, but it is a pure sport, just like they say ("You know, it was at the original Olympics in Greece!"). But it is and will never be this:

Sorry, let me give the last word to the other side. 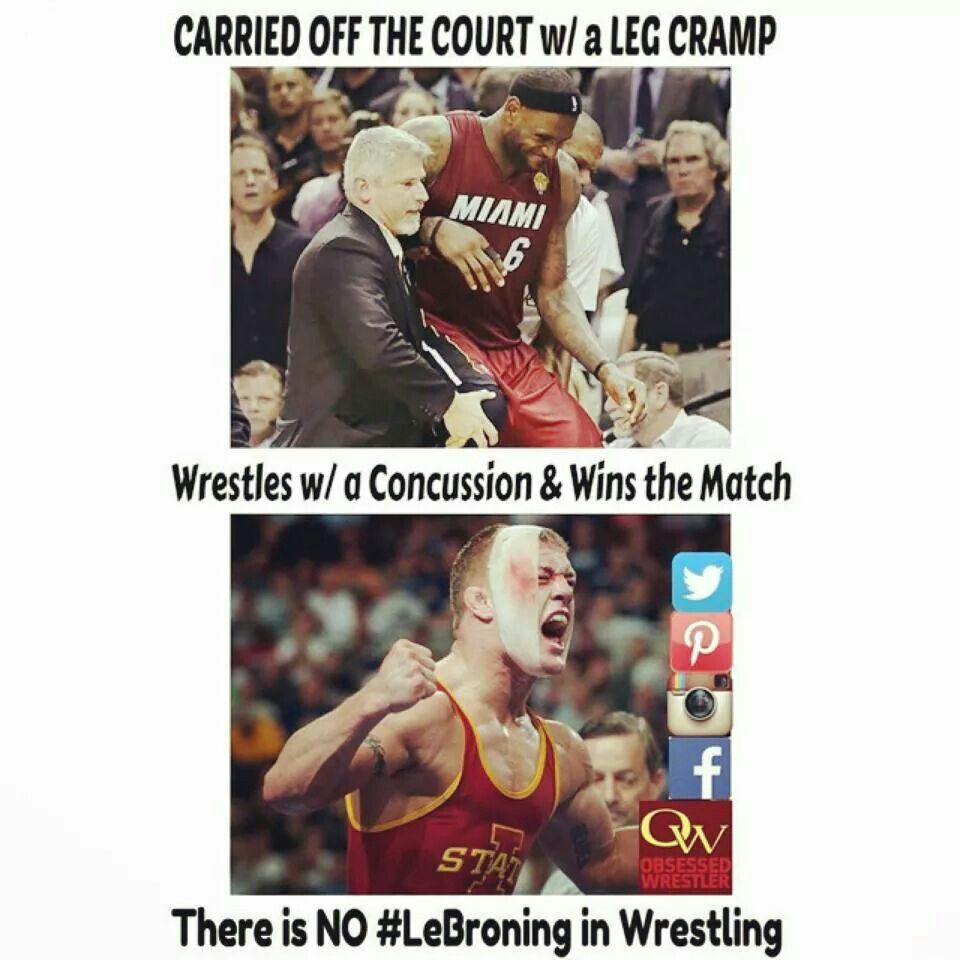 “If you're the most interesting person in the room, there's no reason to shut up.”

2/13 - No. 15 Iowa 88, Michigan State 58: Feels like the first Hyball in weeks where we didn't have an Iowa L to discuss. It's nice. This is kind of how I thought the first game against MSU was going to go. My buddy Lebs (MSU grad/national champion water polo player) said this is the worst Sparty team since he's been a fan, so that's great.

Listen, Wisconsin basketball does not at all impress me, and I would very much like to win this game. More thoughts in the Brad Davison section but will say I had an existential moment realizing I dislike Sconnie hoops more than tOSU football this past week. tOSU football at least had Braxton, JT, Cardale, Fields, Troy Smith, and, the man himself, Kenny Guitton.

She made that shot from Iowa City... @CaitlinClark22 with 13 1st quarter points! #Hawkeyes pic.twitter.com/rbPaNtH9Vb

Caitie Clark continues to remind me of Steph. It's great.

Why is setting arena records the coolest thing in the world? I feel like I could be playing pickup, and someone could inaccurately spout "Yeah, the gym record is four points" and hitting five would feel like invincibility. God damn, I miss pickup basketball.

Caitlin Clark is GOOD at basketball:

We going with Caitlin Curry or Curry Clark?

Can't find the stat, but Brian Cook of MGoBlog said Davison was shooting, like, somewhere between 23-28% in Big Ten play. It is great and everything I believe. Also this happened against Michigan:

Incidental, you say? K, how about this?

An inadvertent elbow from Brad Davison? There is no such thing from him! pic.twitter.com/XJ30u0u2gI

Hey, the refs said it was clean.

The good news is Mike Smith got an and-1 on the next play -- which was purely revenge-based.

Then, the universe unfolded as it should've.

Michigan went on a 35-16 run after Michigan didn't get the call on Brad Davison's elbow of Mike Smith and Juwan Howard was called for a technical.

The Wolverines closed out the game on an 8-0 run to erase a 12-point halftime deficit and sweep Wisconsin. pic.twitter.com/ZEC832I7wf

I asked Ricky for his thoughts on Penn State hoops..

Generally would say I do not believe in myself/have very few skills.

/Juwan looks me dead in the eye and says "Man..." with a compliment after

These are two very, very special men right here. I wish we could have Chaundee in a Michigan uniform for 4 more years, but feeling very thankful that Juwan will be wearing the block M for a long time. @cbrownballin935 @JuwanHoward pic.twitter.com/z4gpFQLMNr

/jumps on rocket to the moon

This hit double hard because I was a big fan of Richardson on Deadwood.

He looks like his mama dressed him so Im leaning yes https://t.co/TpgvPP8L5M

Also, not gonna address the Urban stuff, because, like, come on...

Hahahahaha -- you don't know me, do you?

You know when something is delightful, yet you have no desire to learn more?

He's a left hander. And he plans to be left handed for the rest of this game.

This one took me all the way out.

This MSU possession is the peak of the season, and nothing you say will change my mind unless we win the natty.

Gonna go with a CHOOSE YOUR OWN ADVENTURE ending.

> Do you want wholesome?

Been calling my kids "Chili Dogs" for a week and I don't know if I can stop.

> Do you want vulgar?

cant wait to fuck all my friends when this is over

Iowa vs Michigan: What We're Watching For