This was supposed to be the fun part.

Cusp of the Big Ten Tournament. Double byes. Opposite sides of the bracket. Selection Sunday and the NCAA tournament rapidly approaching.

I root for two teams playing winning basketball, racking up dubs in the greatest conference in all the land. Some of that sounds like opinion, so let's go with hard data. Iowa and Michigan, according to KenPom, are Top 4. Of 357.

Above Illinois and Ohio State and Kansas and Duke and North Carolina and Michigan State and Kentucky and UConn and Syracuse and Villanova and Wisconsin fuck Wisconsin.

Both sustained ankle injuries to starters in the last game of the regular season.

This is Go Iowa Awesome, so let's start with Iowa. Do I even need to tell you about Joe Wieskamp? We just did this last week. He's the team's second-best player and second-leading scorer.

Him shooting 100% with 12 points in 12 minutes before going down made it feel even more like a sports movie cliche. He, somehow, hasn't been ruled out for the conference tourney.

“If he feels really good, my anticipation will be to play him on Friday. We'll see how he does. If he's not at or near 100 percent, then we might hold him. We're going to do what's in the best interest of the student-athlete, bottom line.”

Replacing Wieskamp’s minutes, if it comes to that, will be “an all-hands-on-deck thing,” McCaffery said, mentioning true freshmen Tony Perkins, Ahron Ulis and Kris Murray as players who could be called on. It certainly would mean more time for second-year players Patrick McCaffery and Joe Toussaint, who are already a part of the rotation.

Wieskamp has been durable, starting in all 93 games of his college career.

Eli Brooks is not Michigan's second best player, but he's a senior leader and one of their best defenders. Michigan lost three games this year, and two of those three were when Brooks was not on the floor.

This is how I'm now on the cusp of becoming a college football-level fatalist during what should be an extremely exciting juncture.

Quick, hit me with an Iowa stat that cheers us up:

Most sports fans want their team's best effort at full strength; it makes any result easier to process. It kind of reminds me of the 2006 college football season. When No. 1 Ohio State came into Kinnick to face No. 13 Iowa. Frenzied scene, College GameDay was there, both teams 4-0.

And the Buckeyes fucked us alllll the way up. Troy Smith and Co. took that shit, 38-17. And as much as it sucked, it was definitive. Their better was better than our better, which left very little to say. If this Iowa team was going to run up against a Gonzaga buzzsaw -- or even someone earlier -- so be it... but let it be with all our guys. Please.

Ha, begging and bargaining. If this isn't college football, what the hell is?

"I love that which doesn't exist."

I am greatly enjoying this basketball contest.

At the end, I remember thinking "This was how I thought more of the season would go" before the announcers said Iowa had, like, 13 or so double-digit wins. Who knew? We seriously need to enjoy this more.

He slithered for that free throw one.

Saving the Davison stuff (of course) to instead discuss what went down immediately after.

Did this seem... really quick?

Ill never watch another iowa game in my life with the amount of disrespect that school has shown me and my family. Love the fans but Im in no way affiliated or connected to the university. https://t.co/8ylZg0iK4U

I know some progress has been made on the Marble front, but it felt like so much went down so fast, and it definitely had a stolen thunder element (not calling out Marble at all, more the athletic department). My plan is to let more happen here before diving in headfirst.

. .@LukaG_55 on the way @GustafsonMeg10 inspired him with her work ethic, leadership, and talent.

Saving the rest of this for the Ricky section.

Me: Not talking about Caitlin Clark's awards anymore, only gonna focus on highlights

And, to think, I thought Murray temporarily guarding our man would be the BD highlight of this one:

You know the story by now: he did wild shit at the end, and they lost.

Gard, I have no time for. Iowa fans getting jokes off? I have all of the time for.

Asked our guy for some Big Ten tournament picks. Here is the bracket: 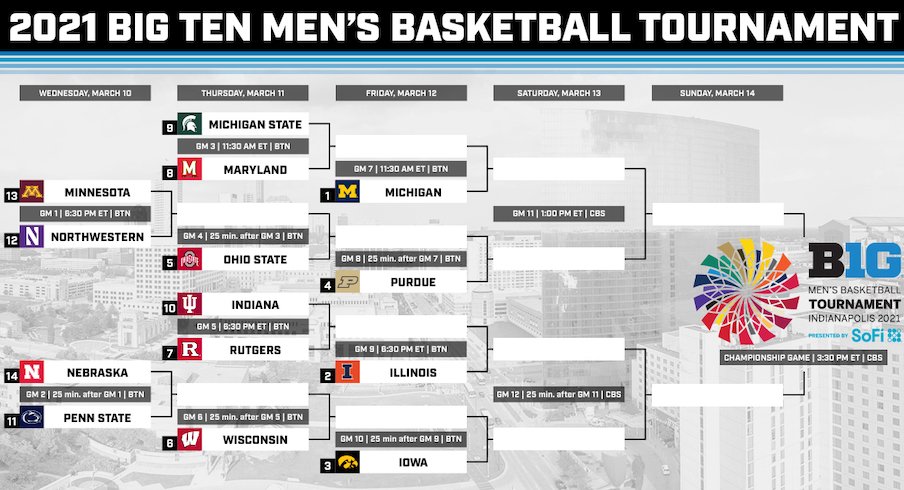 MSU over Maryland, OSU over Min, Rutgers over Indiana, Wisconsin over Penn State

Michigan over MSU, Ohio State over Purdue, Illinois over Rutgers, Wisconsin over Iowa [ed- wait what]

Illinois over Wisconsin, Michigan over OSU

Sometimes, the obvious matchup in sports is too obvious. I'm shying completely away from the Illinois/Michigan collision course with a -- you guessed it -- Ohio State title run, baby!!!!!!!!!!11 Some of the early games happened before I could do my picks, so I'll jump straight to the semis:

Not sure how up to speed y'all are on the Illinois trying to retroactively claim a Big Ten regular season championship discussion, but I heavily encourage a full read of the AD's letter. It is very easy to dunk on them, but he wrote with level-headed clarity and explored a lot of the situation's nuance.

That said, the letter also included this line.

This is a decision that will resonate with our program for generations.

Updated column:
AD Josh Whitman's letter ripping the B1G for not naming #Illini co-champs w/ Michigan raised some fair points. But Whitman voted with colleagues TWICE to go with win % to decide champions, as recently as Feb. 26. That wasn't in his letter.https://t.co/41ZE0dCy1i

Late February?!?!?!?!?!? Michigan was already on their COVID pause then. This whole thing reeks of "Yeah, whatever is fine." Enter: Illinois beating Michigan 76-53 in Ann Arbor on March 2.

I feel for Illinois. Historically, I've been a hater, but this team is undeniable, and I've really fallen in love with their players and style. When my teams crash out, there is probably a "Root For Illinois" post coming. (Ed. Note: Hard pass. -- Ross) But between the generations line and the late February second vote, it's getting harder to defen--

never seen an entire athletic department turn into a message board poster before https://t.co/4T9IeZJ15a

I can't be a part of this anymore.

This remains the funniest possible outcome and you can't convince me otherwise. https://t.co/dlaNjNSZIa

All of this dumb bullshit is giving me acid flashbacks to my incredibly misplaced hatred of the 2004-05 Illinois finals team. That team, in retrospect, was cool as hell. But the fans and culture were insane. It's very easy for haters to call out bandwagon fans as a team ascends. It happens in all pro and college sports with the majority of title runs, so it is definitely low hanging fruit. But there is something so unique about the way Illinois both bandwagons and plays the chip on their shoulder card. It's like being able to fly and breathe under water; you're supposed to only get one (shitty) superpower.

Asked my buddy Dom (the biggest Illinois fan I know) about the letter:

I like that (Whitman) made his case clearly against the Big Ten office/Warren rather than any other team or coach or AD. I would've been fine with or without it, but I'm seeing former and current players/coaches expression appreciation. So I'm fine with it.

Very well put. The letter makes a lot more sense through the AD prism of "You have to do this" vs. "You need to do this." College sports remain hilarious and weird.

Say it again: Illinois is mad that Michigan did not play Northwestern, Indiana and Penn State

I, Josh Whitman, take thee to be my lawful wedded spouse, to have & to hold, for better & worse, for richer & poorer* til death do us part

*unless you win the lottery. Then I'm claiming it mine even through we agreed it would be yours. TWICE!

The faux-controversy wasn't enough to stop the Wolverines from continuing to win people over:

I dont even watch college basketball but Juwan Howard really got Mich hooping. Stepped into that job effortlessly

...though I guess we now have to work on that Iowa part.

I'll give Ricky (as impartial as anyone we have involved in this) the last word:

I get the whining a little bit from Illinois' perspective just because you want a banner to hang so the season can be remembered forever. Like, if they lose in the Big Ten Tournament and don't make the Final Four, there's nothing in the arena that serves as a reminder of what they accomplished. With that being said, it always goes on win percentage and Whitman voted for it twice like you noted, haha. I can see how it gets extremely grating to other B1G fans. I think it's mostly just the 'us against the world' thing athletes do even when you're gonna be a no. 1 seed.

I think that just pinning your mood to something you absolutely cannot control is better for your brain than actually trying to figure out why youre really unhappy. Much easier to blame Jim Harbaugh than deal with my own insecurities https://t.co/FgDMJfPf0I

Just smashing the nail on the head here.

Maybe I just need to see the bottoms, but it kinda seems like these retro Jordan 5s look a lot more ready for the sidewalk than the court.

Some times you just need some new kicks for postseason ... thanks @jumpman23 for the Retro 5s#GoBlue pic.twitter.com/zVvDNLmtgH

At prompting of Matt Muehlebach, Bill Walton gives a shout out to Arizona on Pac-12 Networks broadcast, saying he hopes things "get worked out" because UA fans "are the economic engine of the conference of champions."

How did he get me to feel warm and fuzzy about cheatin' ass Arizona?!

This was more just funny:

/vows to start living life with this type of unbridled joy