Typing words here so there is a lead above the tweet.

me, realizing every plan in the next two months is gonna be cancelled pic.twitter.com/hq1oweaSbc

I fired this off a few hours before my wife tested positive for COVID-19, but whether the result was positive or negative, we knew. Soon, it will be 2022, but it's still COVID-19. Still.

Her symptoms are "mild", if we are defining mild as "not go to the hospital" (shout out to the vaccine + booster). We wear masks in the apartment. We don't go into the same room at the same time. I'm sleeping on a mattress in a loft.

Still awaiting results on my test, as the clinic ran out of rapid tests and gave me a PCR with a 2-5 day window on getting something back. Honestly, the result doesn't matter; I'm asymptomatic (if positive), and we're staring down a ten day self-quarantine stretch to close out this year with no holidays, no friends, no nothing; there is nothing to look forward to. Calendars are swept up dust.

And don't get it twisted -- this is not me throwing a pity party. This is just me tossing our two hats into a very overcrowded ring. Whether you're with us in the ring or watching from the stands, you're in the stadium. The doors are barred. And the crowd has been chanting "THIS SUCKS!" for so long, we don't even know when we started.

Historically, when I do not know what to do with myself, I tend to lean on sports even harder. That was a tough ask this week with Michigan basketball getting postponed, the Bulls getting postponed, and the CFP basically being like "no idea if this is at all gonna happen lol".

CFP announces forfeit/cancellation policy for the semis/natty/Fiesta and Peach if one or both teams participating in each are unable to make it happen. pic.twitter.com/1RzwNCNMHC

Yes yes yes, the "there's more to life than sports" tsk tsk qualifier goes here. But when do they not set the tone?

Being (seemingly) back to square one once a-fucking-gain has the answers changing, not the questions.

Which is why it shouldn’t be surprising that, as the Omicron variant upends our pandemic calculus once more, sports are still a step ahead of society’s response. As the long testing lines in highly vaccinated New York City help illustrate, breakthrough cases are no longer a particularly unusual phenomenon. That’s a problem for sports leagues, which had widely expected to vaccinate themselves out of the pandemic but are suddenly dealing with a dramatic surge in positive cases — resulting in the first cancellations and postponements of games we’ve seen since last winter. Leagues, unlike most workplaces, administer COVID testing constantly, so they’re catching every breakthrough case in a way few other businesses could. But as we are learning, a “positive case” in December 2021 means something very different than it did in July 2020. Sports may be the first public institution to not only acknowledge that, but to do something about it.

After a tumultuous week of frantically rescheduled games, the NFL, NBA, and NHL announced significant changes to their testing protocols. These new rules — especially the NFL’s — are likely a preview of the way most of society will come to think about the pandemic moving forward. Last season, the NFL had been testing all of its players all the time regardless of vaccination status. From here on out, it will test fully vaccinated players only if they’re showing symptoms. (Unvaccinated players like Aaron Rodgers and Lamar Jackson will be swabbed as regularly as they have always been.) In other words, the league responded to a surge in cases not by dramatically expanding its testing program, which it easily could have, but by focusing and clarifying it. This is the new modus operandi. Tests mean cases, and cases mean postponed games. So there’s going to be less testing.

There’s certainly a cynical element to this strategy by the leagues. In a way, it’s reminiscent of those early, ugly days of the pandemic when the former president would say things like, “If we didn’t do any testing, we would have very few cases.” The difference between now and then, of course, is that hundreds of millions people are vaccinated and thus protected against the most severe outcomes from the coronavirus. And sports leagues are composed of healthy, fit, fully vaccinated (and mostly boosted) athletes playing against other healthy, fit, fully vaccinated (and mostly boosted) athletes. This does not entirely eliminate the risk factor of putting on a sporting event. But it certainly makes the risk approach zero, doesn’t it? That’s the NFL’s and NBA’s calculation: Their playing field is a very different place than, say, an assisted-living facility, so different rules should apply. They’ve adjusted the risk calculations.

The logical conclusion of the leagues’ new policy is that a fully vaccinated athlete who has an asymptomatic case of COVID will play in a game. This has surely happened already. It probably happened yesterday. But it’s one thing to suspect as much and another thing for the league to accept it. This may be the only path forward, though. If the leagues test every player every day, they’re going to detect so many positive cases it will be impossible to play — the rest of the season would l look like the past chaotic week did. The leagues are now admitting what most of us are realizing but wary of saying out loud: COVID is just a part of our lives now, and if we don’t learn to live with it, we’re never going to be able to do anything.

This may seem reasonable to you or it may seem reckless; the pandemic has confirmed, if nothing else, that everyone has their own individual risk paradigm. But sports leagues have made it as clear as possible that in an Omicron age, their future depends on making peace with the virus. That future looks increasingly like our own.

I had a half day yesterday with literally nothing to vacation to. Just closed the work computer and walked to the other end of the apartment. Waiting for me was the Bourdain doc. Fantastic, but not ideal to pull yourself out of a void or the void. 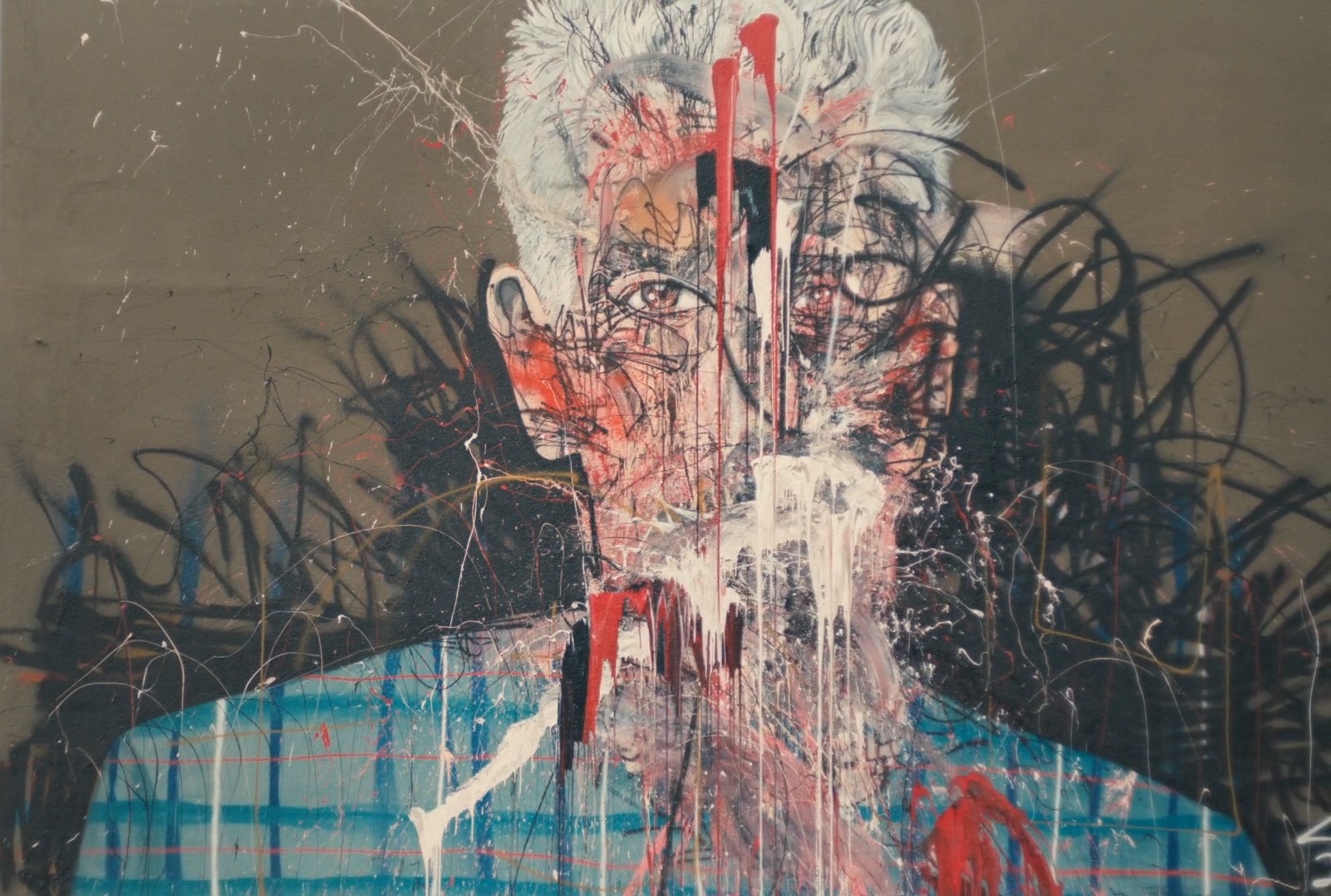 We're literally going from "Why like anything?" to "Why expect to be able to do anything?"

The walls are closing in. I have no answers. Hope? Faded.

But it's do or do not, they say. So we once again take a deep breath, knuckle down, and try to fight our way out of the ring and out of this fucking stadium. May it one day burn to the ground forever and ever and ever. We'll only talk about our experience inside if and when we want to.

"I'd be losing my mind about this if I still had my mind."

God fucking damn, this was a fun game. Utah State played so well together; a real joy to watch. Iowa? Probably not as well as a whole, but sometimes athleticism and cool dunks can trump senior-laden chemistry. Exhibit D:

lol can you think of a chasm of who youd really not wanna fight vs. who youd totally be OK fighting than Joe Toussaint and J-Bo

the rebuttal is here pic.twitter.com/Wgl8yhZjRa

Even the joy section has gone Grinch.

Once again not in the mood to research Davison, so let's roll with some Urban stuff until the well runs dry.

In Michigan, we call him Urban Meyers. Please enjoy this region-specific humor, reader.

I mean we all know Urban Meyer was really thinking about this when he kicked Josh Lambo pic.twitter.com/OTV548g32T

Reporter: "I think you got a really got a chance to finish with more career wins as an interim coach than Urban has a HC."

My main takeaway from this graphic is that Franz Wagner may be the next Shaq https://t.co/Kj95XA1GDd

Just give me this.

We all must continue to clown this game.

The Peach Bowl is currently in some bizarre arbitrage zone where it costs you more to park than to attend. pic.twitter.com/kX9P8rrOJW

And that's just against Iowa. https://t.co/KYeANGsQNt

Not 100% sure this is the NCAA's fault but also giving them zero benefit of the doubt.

Unfortunately, I cannot profit off of my NIL because I am an international student. Even though I will not be compensated, I truly love & appreciate the Michigan fanbase so I am excited to share that my jersey & jersey tees are available at https://t.co/2ZSbbWz6nc pic.twitter.com/EWtDkck9Cc

Sure its threatening thousands of lives, millions of peoples plans, and billions of dollars in global commerce but I swear to God if Omicron messes with Michigans first CFP appearance Im going to lose my shit.

...had already thought this thought at least four times the day Bryan Mac tweeted this.

Did they win a piano? https://t.co/qGuItl0Xj4

Watching this live Mac was in Disbelief! Bill Walton on the call was everything https://t.co/HM7lP9HZpz

We've all guarded this guy in pickup.

The memes will get us through.

The Hybrid: Caitlin Clark Is The Greatest Iowa Athlete

The Hybrid: Caitlin Clark Is The...