The Hyball is a weekly basketball column.

When it ends full circle, the writing comes easy.

A season that started with Purdue... cool? epically ended not-so-cool for the Boilermakers.

But let's rewind a little.

My uncle turned 60 this fall. He lives in New Jersey and is a regular hooper who actually organized a run the morning of my wedding. He also works for DTLR, so his shoe game is light years ahead of most (he just got these; peep the red X's on back).

So, in November, just before his b-day, I was online and was gonna get him, like, a t-shirt before the light bulb went off. Why not give him the gift of an experience? I threw out the idea of a trip (with little help outside of that). Because he's a better planner than me, he came up with the idea of a Sweet 16 and/or Elite 8 games in Philly combined with a pilgrimage to the Basketball Hall of Fame in Springfield, Massachusetts.

I was in before we even started talking logistics. But, oof, there were logistics. I flew out from Chicago to Baltimore where he works during the week, then we drove 2.5 hours up to NJ. From there, it was about 45 minutes into Philly. We were really worried the Sweet 16 was going to be a dud after 2-seed Kentucky and 1-seed/defending national champ Baylor got bounced, but I retained optimism. Purdue-St. Peter's had the Big Ten angle us Midwesterners say we don't need but probably do + epic upset potential, and UNC-UCLA was pretty dang blue bloody.

After knocking back a couple at Evil Genius and Second Street Brew House in the early afternoon, we got to the stadium about an hour before tip.


Though I knew, at the end of the day, I'd be St. Peter's all the way, I've beaten the drum for Purdue a lot this year, and Jaden Ivey is one of my favorite players in all of college basketball. So, mostly as a joke, I found myself watching the Boilers and FANNING UP.

Me: Purdue, historically lame and bland, is very cool and deserves neutral people to root and care about them

/hears one Boiler Up chant

Ivey was seriously incredible live. He has that Caitlin Clark hyper fluidity thing where he just moves Differently And Better than anyone else out there. So, in all seriousness, I did root hard for him.

But this was my first ever IRL NCAA Tournament game. We needed an upset, we got one, and if it felt bad (it didn’t), we pushed through.

I have been a st. peters fan for my entire life

I feel bad for Purdue. But this is tremendous content.

That is the most Purdue basketball thing to ever happen.

Saint Peters is throwing down lobs and making miracle hooks and Purdue is throwing passes to nobody and literally running into each other during loose balls. This is a really bad Disney movie.

If Disney movie means preordained, then I'll give it to you. The end was a whole mood.

The pain of the Purdue fans in the crowd could only be compared the pain we've all encountered from college football, the World's Worst Sport™.

Watching Purdue fans rebook their flights while still in the arena was next level. pic.twitter.com/GmvVFyMwZq

UNC-UCLA was equally good. I really believed in that Bruins team, but it seems like the Heels are really figuring things out at the right time.

The taste in our mouths was so good after, we were basically afraid to push our luck and go back for the Elite 8. So we didn't -- and it sucked. UNC handled their business, and the Final Four got blue bloodier.

Column: When was the last time all the Final Four programs had won at least three national championships? Never. Thanks to Saint Peter's for providing the populist appeal, but the blood runs blue from here https://t.co/Bd4MwOE08P

I can get with that.

Hoops hall was a nice little trip as well, for the record. Though I didn't learn all that much, my favorite part was this court they have at the end of your tour. It's full but also has some old school baskets on the side (including the peach!). 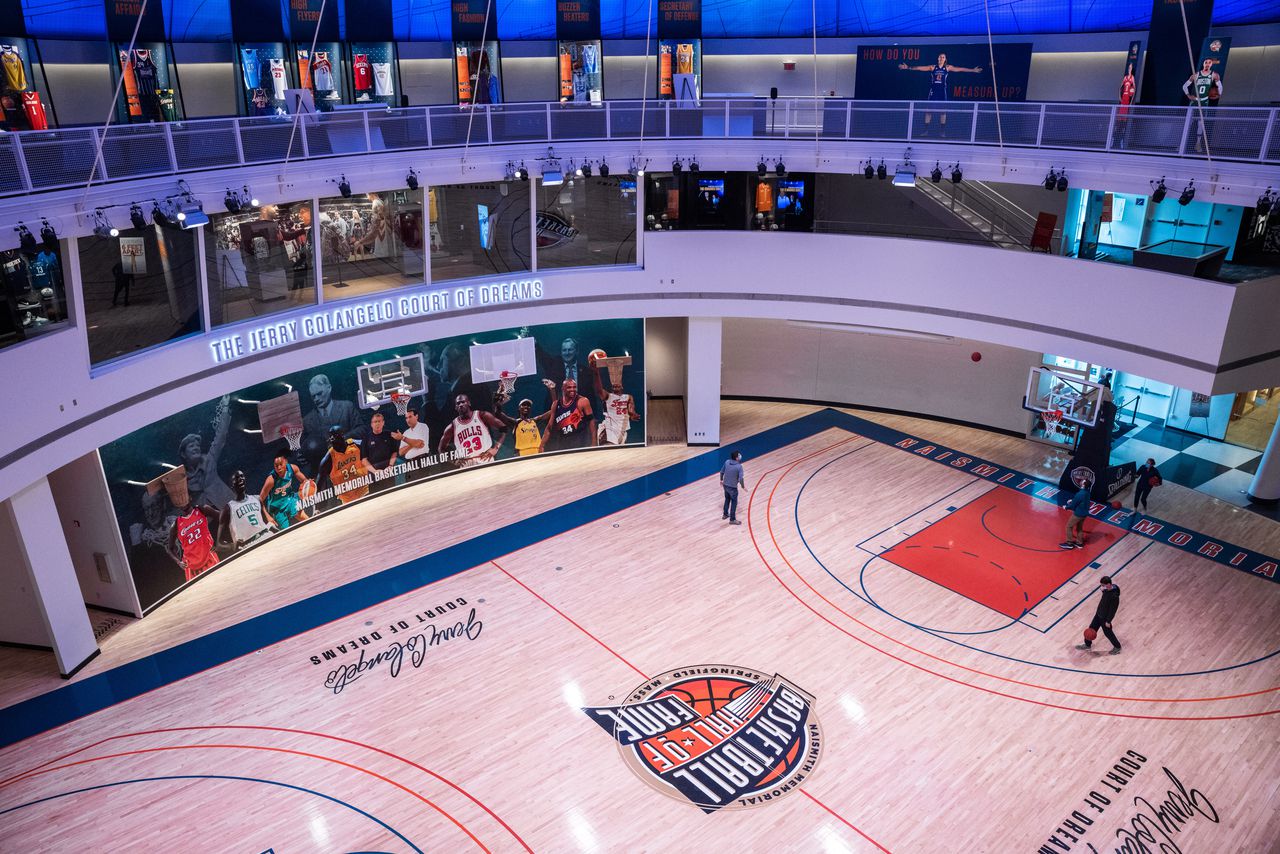 I'm a slasher with a janky jump shot, but we all have our moments.

Just canned two NBA threes in a row at the Basketball Hall of Fame, am officially now Steph Curry. pic.twitter.com/fkvmpb5tof

Seriously, it's perfect; you elevator up to the third floor to start but can hear people dribbling and shooting as you walk the hall for the more traditional part of the tour as you make your way back down to the bottom; perfect ambiance.

“At your highest moments, be careful -- that’s when the devil comes for you.”

A year full of a lot of highs and amazing memories with this group. No one Id rather share the court with through it all! Hawk fans, you are the best in the country! We appreciate every single one of you Now we go back to work see you next year GO HAWKS pic.twitter.com/UjppAOXY0z

Slap discourse is BACK. Someone connect the dots to how this was Brad Davison's fault again.

With pleas--aw damn it, Thicc!

Youre right. This cant be Brads fault. Hed never be on TV this late in March https://t.co/X4zPtMBpLP

Yeah, not toppin' that.

As expected. Though I always held out hope with my irrational "is he really gonna leave his twin brother?" take, he had to do it. Had to. Keegs, we are in your corner always.

While I should have expected the next one, it gutted me.

Joe Toussaint, you will always have a fan in me. I hated when you let your athleticism get the best of you but loved literally everything else. You could really set guys up when you put your mind to it. Plus the game winner vs. Virginia.

Well, can't get worse than that news.

Thank you Iowa, for everything pic.twitter.com/fbpxPhmCGT

There's only one thing that could make this worser than worse: combining the two.

Filip Rebraca tells me that he plans to return to Iowa next season and use his additional year of eligibility.

Legit had no idea he had any eligibility left. Coulda saved the tribute for next season!

You know, when people already think you kinda look like Will Smith...

Juwan Howard looks like someone tried to draw will smith from memory pic.twitter.com/FrzhIPDHsb

...slapping people only, like, a month apart is not going to stop the comps.

Yes, yes -- but can we go with something a little more innocent and generic?

Ah, yes, the basketball team. Well, I mean, you know:

So Michigan lost to Iowa in Ann Arbor, then lost to More Disciplined Iowa in the tourney.

An emotional Michigan squad exits the court after a tough loss to Villanova in the Sweet Sixteen. Thanks for a fun season, guys. Plenty to be proud of. pic.twitter.com/fEwnlxgg8R

Still, as we talked about last week, getting to the Sweet 16 rules. I should hate Villanova, but I don't. They play well, they're coached well, Jay Wright rules; a loss like that sits about as well as one in the postseason can.

That said, I've held back on a lot of Caleb Houstan slander this year... and I'll leave it at this: had he been a little more as advertised (um, 5-star), I think this would've been a Final Four team. That's me trying to be civil. The memes... the memes were less civil.

Juwan Howard directed every single Michigan player on the court to create that open Caleb Houstan 3-pointer ... and he hit the side of the backboard.

Well, that's less a meme and more just a description. Here are the memes.

Caleb Houstan wide open hits the side of the backboard. Like I dont wanna pile on, but come the fuck on and then youre in ESPNs 1st and 2nd round mocks? Man

Was just the right amount of drunk seeing that last one; there was no going back.

But at least we had the women. They made the Elite 8 and took Louisville down to the wire before, well...

"I didn't know if I was ever going to play a minute at Michigan and I just played in the Elite Eight as the starting point guard for this University."@daniellerauchy giving us all the feels.#GoBlue pic.twitter.com/YmEzrVlcLd

In all earnestness: seriously beautiful.

god i hate louisville to an unreasonable degree

The good news is South Carolina remains. As well as UConn.

14 straight Final Fours for UConn has to be the most absurd active streak in any sport. It's a single-elimination tournament!

Ending this on a fun note:

Jordan Poole just took a half court shot to tie the game with 5 seconds still on the clock... pic.twitter.com/aiq2LuB4zc

I SAID FUN NOTE; WHY JORDAN WHY

Even with my '90s Bulls bias aside -- jk, can and will never be put to the side, ever -- I will very much miss Ron Harper Jr. at Rutgers. Will they ever be this interesting again?

Speaking of interesting players for other Big Ten teams...

Noooo -- will miss him. As someone who lived the highlights and didn't care about the turnovers (as a non-fan), he was must see TV. Wonder how they'll fare without him...

Where are we all at on the "is Gonzaga a major fraud?" talking point that seemed to emerge this week. To me, there's enough on both sides to make strong cases, but, my assumption, is most people are gonna be entrenched in one camp or the other. I think I started as "frauds!" -- even thinking they should maybe never be a No. 1 seed ever again, ever -- before drifting back to the middle and maybe even fully reverting back to "I dunno, they're pretty great despite no titles."

No matter where I land, I can definitively tell you the most fun side to be on was the "frauds!!!1111" one for. shore. Hatin' shouldn't be so easy.

We need to know what Tatum said here pic.twitter.com/o2128NCxEM

too many of you have strayed from these core tenants pic.twitter.com/lg4nFve789

Cade McNamara To Transfer to Iowa