Skip to main content
By ClassyHawkeye on November 24, 2020 at 8:00 am @classyhawkeye

In 124 seasons of Iowa Basketball, this year's Hawkeyes will be the ninth in school history to open a season ranked in the A.P. Top Ten. Of the previous eight teams, two played before the Civil Rights Act and when the NCAA Tournament featured only 24 participants. Since the sport and college basketball as a whole has dramatically changed since the mid-1950s Hawkeyes roamed the court, I feel we should address Iowa's first two preseason top-ten squads separately from the other six. 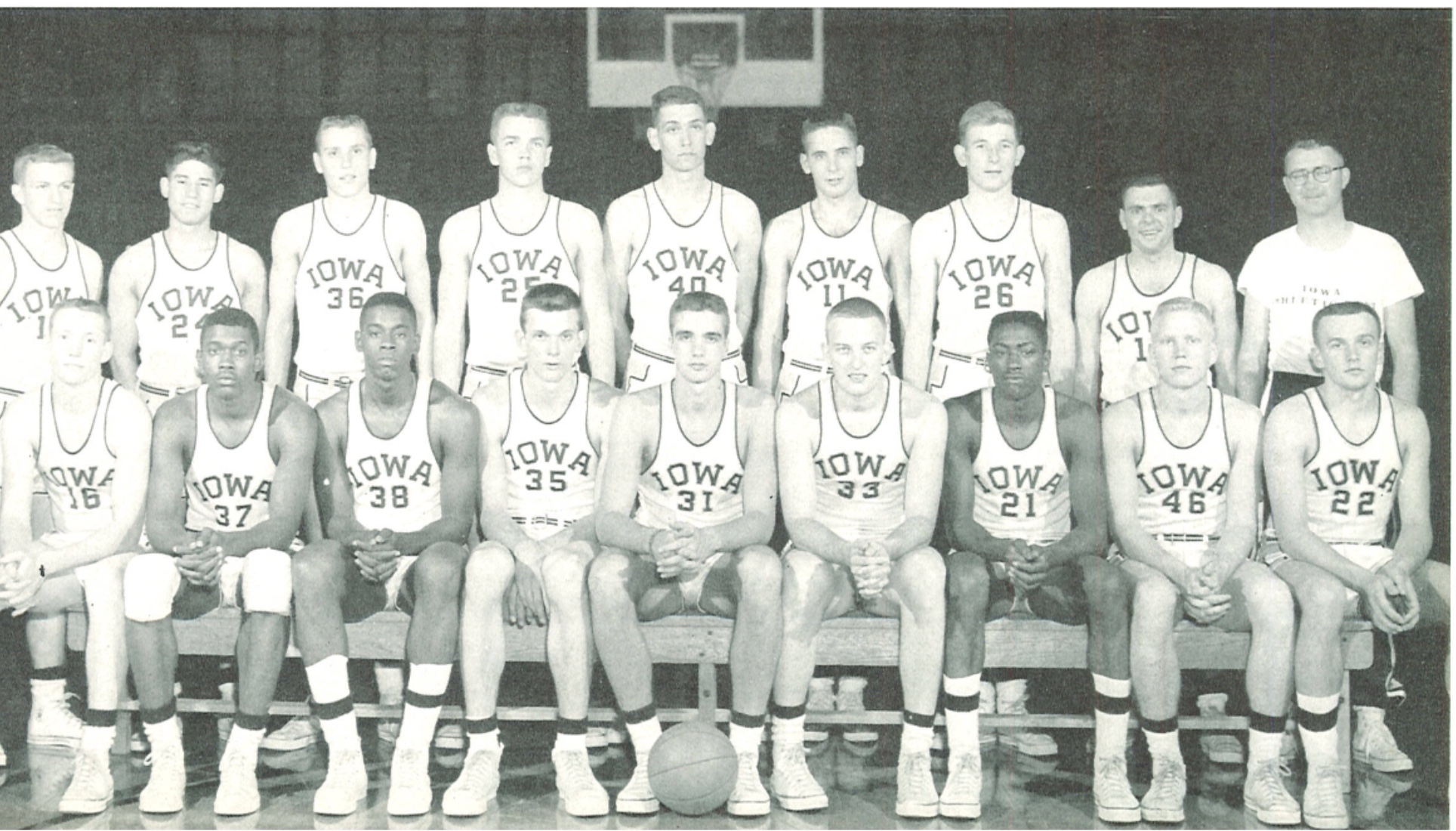 Bucky O'Connor's 1954-55 Hawkeyes opened the season ranked #5 and won 16 of their first 20 games on their way to a 19-7 (11-3) record and a Big Ten Title. Led by the famed "Fabulous Five" of Carl Cain, Bill Logan, Sharm Scheuerman, Bill Schoof and Bill Seaberg, the Hawkeyes defeated Penn State and #4 Marquette in the NCAA Tournament to reach the school's first Final Four where they fell to #3 La Salle 76-73 in Kansas City.

The next year, the Fabulous Five returned but #4 Iowa stumbled out of the gate to a 3-5 (0-1) record. The Hawkeyes rattled off 16 straight wins to finish the regular season 17-5 (13-1), capture its second straight conference title, and make a return trip to the Final Four. In the National Semifinal, the #4 Hawkeyes defeated #15 Temple 83-76 to make the first (and only) National Championship game appearance in school history where they fell to Bill Russell's #1 San Fransisco Dons 83-71.

Over the last 40 years, Iowa has opened the season in the top-ten six times, going a combined 129-63 (.671) overall but only 58-48 (.547) in Big Ten play. More concerning is that of the six teams, four made the NCAA Tournament, two missed the tourney altogether, only one reached the second weekend of the Big Dance, and none reached the Final Four. Only the 1981-82 and 1986-97 Hawkeyes finished within two games of first place in the Big Ten.

And then they faded.

The Hawkeyes lost six of their next eight contests, ending the season on a three-game losing streak and entering the 48-team NCAA Tournament a disappointing #6 seed in the West Region. Banished to Pullman, WA, Iowa pulled away for a 70-63 victory over #11 Louisiana-Monroe in round one to set up a date with #3 Idaho.

The Hawkeyes rallied from down 10 at halftime to force overtime before Vandals guard Brian Kellerman’s 15-footer in the final seconds hit every part of the rim before tickling twine and sending Iowa home with a 69-67 loss.

George Raveling had the task of taking over for the greatest coach in school history (Olson) and was left a seemingly ready-made Iowa team ranked seventh in the nation to start the 83-84 campaign. The Hawkeyes started fast, picking up a win over #10 Oregon State and reaching as high as fifth in the country in early December.

Then the bottom fell out.

The Hawkeyes opened their Big Ten slate a ridiculous 2-11, capped by a seven-game losing streak stretching from late January to late February. Iowa rattled off four wins in its last six games, but it wasn’t nearly enough to warrant consideration for postseason play.

Dr. Tom Davis arrived in Iowa City just in time to take over arguably the greatest team in school history.

Led by senior forward Brad Lohaus and sophomore guards Roy Marble and B.J. Armstrong, #10 Iowa stormed out of the gate to its best start in school history, punctuated by a 101-88 victory over #3 Indiana at Carver-Hawkeye Arena in late January. On January 24th, the Hawkeyes were 18-0 (6-0) and voted the #1 team in the country. A surprising home loss to a 12-6 Ohio State squad ended Iowa’s undefeated bid and started a disappointing 9-4 stretch to close the season, costing the Hawkeyes a Big Ten Championship and “relegating” them to a #2 seed in the NCAA Tournament's West Region.

Still, at 27-4, Iowa finished the regular season ranked sixth in the nation and navigated its way to the Elite Eight with wins over #15 Santa Clara (99-76), #7 UTEP (84-82), and #6 Oklahoma (93-91 OT). The Sweet Sixteen victory over the Sooners is one of the most memorable victories in school history. Trailing 91-90, senior guard Kevin Gamble hit a three with :01 left to put Iowa into its last Regional Final to date.

One game from the Final Four, the Hawkeyes ran into top-seed and #1 in the country UNLV. Iowa jumped the Runnin’ Rebels early, at one point leading by as many as 18 late in the first half, and took a 58-42 lead to the locker room. The Hawkeyes were 20 minutes from their second trip to the Final Four in the decade.

Unfortunately, in a final twenty minutes that still haunts the program, the Hawkeyes scored 35 fewer points in the second half, 23 to be exact, and the Runnin’ Rebels ran right by Iowa and into the 1987 Final Four with an 84-81 win.

Once again, a late season three-game losing skid in early March took Iowa out of the Big Ten Title chase, but the Hawkeyes rebounded to beat #6 Indiana at Carver to close the season 22-9 and enter the NCAA Tournament as the #4 seed in the East Region.

In Providence, RI, Iowa pulled away from #13 seed Rutgers in the first round before suffering a gut-wrenching 102-96 double overtime loss to NC State in round two. It was a disappointing ending to the careers of the Hawkeyes' three-headed monster of seniors (Armstrong, Marble and Horton) and just another case of a top-ten Iowa squad that left us wondering “what could have been.”

Following six-straight seasons without a trip to the second weekend of the Big Dance, Davis' 1995-96 squad shaped up to be his best since the 88-89 team. Ranked 10th nationally to start the season, Iowa overcame an early loss to an unranked Duke squad in the finals of the Great Alaskan Shootout to finish non-conference play 11-1.

And then the Big Ten gauntlet came.

The Hawkeyes dropped five of their first nine conference games before winning seven of their last nine, including a senior-day win over Big Ten Champion #4 Purdue, to finish the regular season 22-8 (11-7) and earn the #6 seed in the West Region of the NCAA Tournament. In Tempe, AZ, Iowa rallied from a big second-half deficit for an 81-79 first round win over #11 seed George Washington.

Two days later, the Hawkeyes would fittingly fall in a pseudo-road game to Olson and his third-seeded Arizona Wildcats 87-73 in the second round.

Ranked #9 in the preseason, [coach who shall not be named]'s Hawkeyes started 12-3, highlighted by an 83-65 win at #2 Missouri in mid-December. As the calendar turned to 2002, Iowa was still ranked #9 in the country. Like so many times before though, the Hawkeyes faded in conference play, losing seven of their next 10 games and going 1-6 in their last seven games of the regular season.

Then suddenly, with the season having fallen apart, the magic returned.

One step from a miracle trip to the Big Dance, Iowa’s magic ran out in an 81-64 loss to second-seeded Ohio State in the Big Ten Tournament Championship Game. The Hawkeyes received a spot in the 2002 NIT but dropped a first-round home contest to LSU.

So there you have it. When Iowa was voted #5 in the preseason A.P. Poll earlier this month, expectations for this season rightly skyrocketed to not only winning a Big Ten title but potentially reaching the Final Four and winning a National Championship. In order to meet these lofty goals however, the 2020 Hawkeyes will have to buck the less than stellar history set by the school's previous trips to the preseason Top Ten.