Not really sure if you can call it a surprise.

We live in a world where football coaches get $10 million as a failure bonus and fifth-grade teachers are buying their own staplers.

Kansas is going to build a $17.5 million luxury apartment complex for its basketball players. https://t.co/HX4rGMLJZh

That's, like, over a million dollars per player on the roster, man.

After Michigan lost to Ohio State for the 83rd time in 14 games, I knew we were headed for problems. After Wazzu mailed in yet another Apple Cup, I knew we were making out with the bottom. Even the typical remedies stopped working:

In the aftermath, Michigan lost their QB1 (Wilton Speight) and QB4 (Alex Malzone) to graduate transfer, while QB3 John O'Korn gave us a genuine moment of passionate pain:

Here is a losing chart of Michigan's last 14 games vs. Ohio State and Washington State's last nine games vs. Washington (they combine for a 2-22 record).

Last year, at the start of the season, I made my debut for Go Iowa Awesome by asking a simple question: What keeps you coming back?

Last Saturday, new lows showed themselves, and, for the first time in a long time, I felt legitimately ready to throw in the towel in a realer way than ever. Dejected as hell at a Friendsgiving party, I actually told my gf and her friend (Cougs fan!) that I was heavily considering abstaining from college football in 2018. My logic was Peters is a freshman, Stanley is a sophomore, and who the fuck knows what Wazzu is doing at QB after Falk leaves. I'm not gonna, like, "miss" anything, right? Right???

"But what about The Hybrid?!" no one asked. Well... maybe I'd write it without watching games, only seeing what the matchups were week-to-week.

Go ahead and count the number of Buckeyes Donovan Peoples-Jones shed on this punt return. pic.twitter.com/i73w0YHeC9

This was my favorite moment of The Game, and, ironically, my cable provider was at a commercial when it occurred due to confusion about when the quarter ended. But it's no matter.

Donovan Peoples-Jones is one of those "gates of hell" players. One of those dudes you'd go to war with or illogically feel like you'd be friends with. He's... just downright god damn awesome. These faux connections occur sometimes with hockey goalies or the right QB, and when it happens, it happens.

So DPJ, sorry... you're (probably) why I'm coming back. No one deserves this much emotional baggage pinned on them.

Plus we totally housed Nebraska.

The fist just makes... no sense at all.

"Brevity is the soul of wit."

Instead, we get David Shaw. Two teams Wazzu already beat this year. This just... sucks so bad.

The one thing cheering me up?

"If you want to see what the WSU offense would look like in the NFL, go watch the Apple Cup the last 4 years." -UW Asst Coach Jimmy Lake.

Do you know that from your... NFL experience, Jimmy?

Nebraska: As always, with so few games during championship week, I'mma give some teams their own section just because. I know y'all hate Nebraska and I don't, but these two things made me feel bad:

1) Noticed this myself while watching on TV

With the season they've had, Nebraska still getting 90,000 in the seats amazes me. Another example of how it's such a unique fan base with pretty much unmatched dedication pic.twitter.com/Ci6dcVu1jj

Welcome everybody. Thank you for being here, Riley said. I came in to watch the film of the game this morning and got interrupted. #Huskers

Maybe he was just trolling.

Memphis (20) at UCF (14): Man, I hope UCF wins this game and further exposes college football for the fraud it always is and will be.

I get why UCF isnt going to the playoff. But if UCF cant even get into the discussion when there are no dominant teams and it seems pretty likely a two-loss team gets in, the Group of Five should be pissed.

I mean, nothing will change and we're all going to die, but still.

Louisiana Monroe at Florida State: Hey, FSU -- you did make an appearance this week!

VIDEO: A Florida State fan gets kicked out of Jimbo Fishers radio call-in show after asking where is the loyalty? amid Texas A&M rumors. #Noles #Gigem pic.twitter.com/yYgfD7QWGY

Western Kentucky: Bandwagons aren't just for good teams. These... these are my guys.

I will remember yooouuuuu

*you grabbed your crotch*

Will you remember meeeeee pic.twitter.com/Si6QPBJvS4

Penn State: Death to my enemies, as always. But if they can't get got, getting weaker certainly helps.

Auburn, you glorious bastards -- y'all did it again?!

The Auburn fans that tried the ford the bushes at Jordan-Hare like they were playing Oregon Trail following the Tigers Iron Bowl win did not fare too well. https://t.co/tIpLTRBeTd pic.twitter.com/M27Jx9Ta2q

Honestly, this game is found money, and I really don't care who wins. But I hope Auburn wins.

/goes gently into the night

Texas: Nothing to add... this is just a great GIF.

Me heading over to Texas message boards before bed pic.twitter.com/5JiGwXaNP8

Tennessee: Who even knows what to say about the week the Vols had? Me... nah. Lane? Lane again!

Honestly, this image will stick with me for a long time:

The Rock on UT's campus. pic.twitter.com/aG3BXrkKOW

But what I eventually settled on was Jason Kirk's take: 8 brief things that are simultaneously true about the Greg Schiano-Tennessee disaster.

Worth a skim, at least.

Miami (FL) (7) vs. Clemson (1): Before we get into two people yelling at each other, let's make this about the football for just a second. This play... this play, man:

HUNTER RENFROW HAVE MY CHILDREN pic.twitter.com/ewX6ZhcYYO

For the last time this year, Clemson Tom. He gets first word before my friend, The Turnover Paige (Canes fan), rebuttals. CT:

Clemson’s playin' for another ACC championship game. I think this is, like, our third in a row -- honestly I’ve lost count. This year looks to be a little bit of a better game only because Miami is living on some fool's gold.

You guys have basically struggled with almost every team you have played this year. Florida State took ya down to the wire. I will give you that you beat Notre Dame. Thank you so much for that because I hate Notre Dame. However, you’re not as good as what your record shows. Your quarterback is going to get eaten alive by our defense. You are one dimensional on offense.

You have Mark Richt which means you have somebody that kinda knows what he's doing when it comes to coaching. But there’s a reason Georgia let him go: he can’t win the big game. For example, look at the Pittsburgh last week. Why was he benching the quarterback? That’s right, he freezes up with decision making in the spotlight.

Is it going to be a blowout? No, but we are going to win the ballgame, yeah. I would love to trash talk a little bit more, but you’re just not that great of a football team. Like I said, you’re living off fool's gold from that weak schedule. Welcome back to somewhat relevance, but we’re going to beat you on Saturday, and everyone else is going to see exactly who you are. We’re going to expose you like you exposed Notre Dame. Once again, thank you for beating Notre Dame.

By the way, the Turnover Chain is really stupid. Only sorry ass teams need gimmicks like that.

Get ya chain tooken

Paige, my friend... the floor is yours:

I am savoring these moments going into the game rather than concerning myself with the outcome. This is Miami's first appearance in the ACC Championship Game, and I'm less nervous for this than I was for Pitt (and for good reason, apparently).

But Mark Richt more than knows what he is doing when it comes to coaching. He got the Canes to this point (as he did with the Bulldogs in nine of his 15 seasons), but now it is up to the team to actually win. And if they can't, they get benched like Rosier last weekend.

Against Pitt, there were receivers open with YAC for days, and Rosier couldn't find them. That loss was on him, not Richt. Richt had to bench Rosier to convey what was at stake -- that it isn't all fun and games on the sideline... even though it constantly appears to be.

Miami may not be allowed to dance on the field anymore, but our defense is celebrating every time they come off. The Turnover Chain is no gimmick. It is not the reason for our defensive accomplishments; it is the recognition for them. Our D would be making these plays without the Turnover Chain, but Miami often doesn't get the credit it deserves and the Turnover Chain [ed- it's called the TURNOVER CHAIN, you guys, someone capitalize it sheesh] makes sure people know about what we are doing when our backs are to the end zone. It may be reminiscent of Miami football in the '80s, but who wouldn't want to relive that party? Miami winning again is fun (for the whole country it seems), and I am HERE FOR IT.

What I want to see from Miami this Saturday, if we are going to have any chance of winning: better protection for and more consistency from our QB -- he needs time to see the whole field; calling big plays -- Clemson doesn't give up many, so we need to stack the odds in our favor; deft run defense and agitating their QB -- he is no Deshaun Watson, so if we can limit their run game and force him to carry the team, I think we have a better chance of breaking up those plays; scoring on turnovers -- don't let the chain be in vain (I really did not want to rhyme there); and our backups stepping up to prove that Miami football will be making noise for years to come -- our WR1, TE1, and RB1 are all out with season/college-career ending injuries, which makes it hard to even imagine winning, but I have no problem with our No. 2 guys trying to make their cases for those starting spots next season. Oh yeah, and to keep having fun.

Illinois: If losing all the time wasn't enough for Illinois, this also happened:

This man just threw the flag at the ref pic.twitter.com/SuH0pwR3jZ

No one in this game will be cooler than Barrett

/backup comes in with eyeblack under one eye only

"You're rooting for Ohio State, Bobby?"

YES. Yes, I say. My ideal outcome: tOSU wins but doesn't make the Playoff anyway. The actual outcomes: tOSU wins, makes Playoff, wins national title, calls for bombing of my residence -or- Sconnie wins gross but gets disemboweled in the Playoff by Team Anybody.

Let's close the year making fun of Urban Meyer. After The Game, he said this:

Urban Meyer says he wants an "all-out investigation" into which cameraman collided with J.T. Barrett prior to the Buckeyes' win against Michigan. https://t.co/4gBMtegEdt

Then, maybe immediately, Barrett himself said it was an accident. Then, a few days later:

Despite what Urban Meyer said, Ohio State AD Gene Smith said there won't be an investigation into who bumped Barrett. Instead, OSU will work with the Big Ten on sideline logistics: https://t.co/bu8IiPiDqE https://t.co/LROCqBR60y

In conclusion, this is who I am rooting for to win the Big Ten championship. 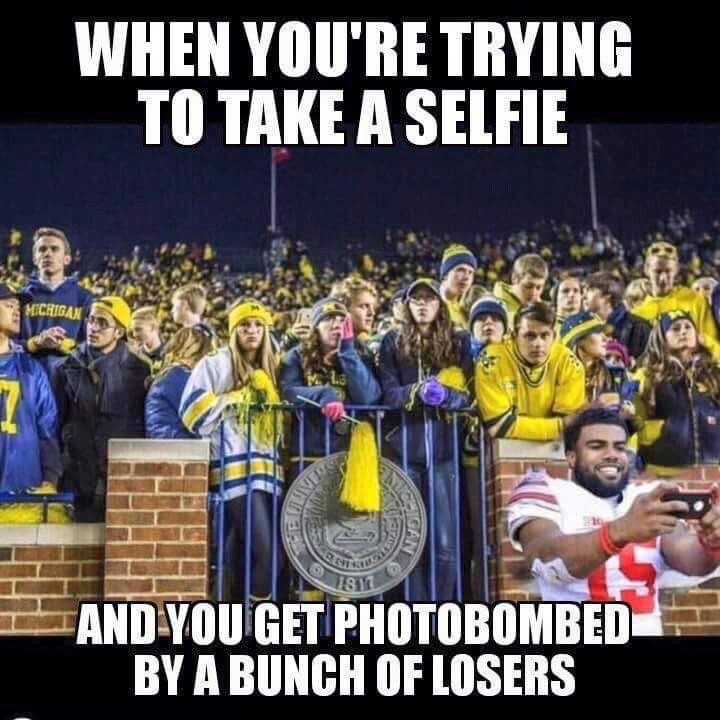 This has me absolutely rolling pic.twitter.com/7BlnCcf7G4

Until forever, or the next breaking point.

Thank you, sincerely, for reading this season; love y'all nearly as much as I hate myself.