Big Ten teams lost 7 nonconference games against unranked opponents Saturday, the conference's most such losses in a single day since the AP Poll debuted in 1936.

I mean, aren't we marching to inevitable death anyway? We are, you say?

From #CFB macro POV, the downer of 1st 3 weeks: stronger than ever sense that a VERY small number of teams look capable of winning the #CFP trophy. Lack of fresh blood & regional diversity is never ideal. Our version of Warriors v Cavs. But hey, somebody step up, prove me wrong!

I've railed on conference pride not mattering for years and years, and though I'm sure there are detractors or traditionalists, what do these people do when there's nothing to have pride about? Join me. Join us. The Big Ten is stupid, Iowa rules, and yes, Iowa plays in the Big Ten, but Iowa is its own thing. Do you want to roll with Noah Fant or Jim Delany?

Because combining them does not work.

Abandon ship. And if you're still torn and still wanna root for, like, Michigan State and Rutgers for no real reason... hey, at least we're not the Big 12?

With TCU's loss to Ohio State, the Big 12 is now 0-14 in non-conference games at AT&T Stadium.

Texas is the reason, they say.

Florida Atlantic at UCF (16): When not napalming Ohio State, Brett McMurphy had some time to kick out this very cool UCF stat.

I seriously half-expected it to end with "Ohio State -666".

Penn State (10) at Illinois: Illinois, you think Vontae wants to use the rest of that eligibility?

Vontae Davis retired from the NFL rather than be a Bill for one more half: https://t.co/SkuGItCY08 pic.twitter.com/uorARW0AEZ

Washington State at USC: Can USC stop WRs like this?

A closer look at the touchdown by Tay Martin #GoCougs pic.twitter.com/lv97BXLU7e

Because they ain't stoppin' this:

I believe in this man pic.twitter.com/HrFZWZDwz9

No, seriously, that picture is real.

I want YOU to come to Pullman. pic.twitter.com/0C60Wz2CEM

Sadly, this is also real.

When Wazzu lost to Eastern Washington, the Cougar defense spent the first half of the game running two completely different schemes at the same time because they weren't wearing the same wristbands https://t.co/YLUeAE6v3E pic.twitter.com/u2gCz4y5ft

Georgia (2) at Missouri: Georgia's cakewalk to the SEC title game is so fluffy that I debated a new feature where we talk about different cake types every week instead of their games. The problem is I looked at the first one (Angel cake) and just got hungry and sad. This also surfaced: 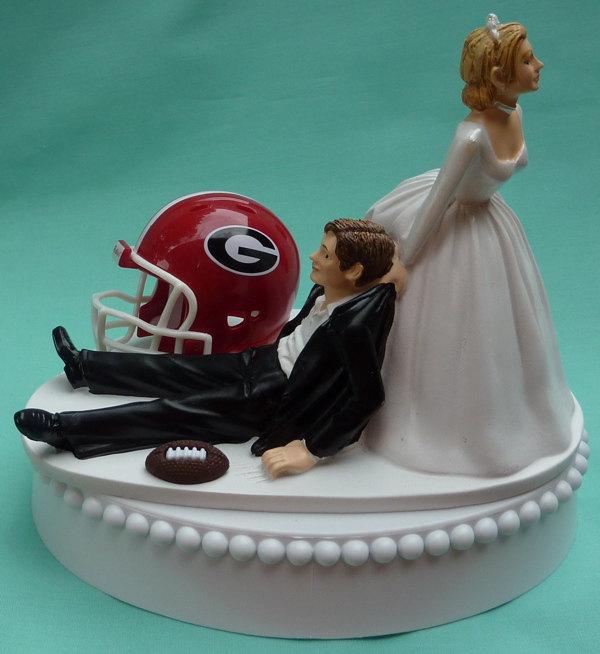 The dug in claws really do it for me.

Notre Dame (8) at Wake Forest: Bleh, meh, shut up. I'm about two and half weeks through with my "no chicken for seven weeks because Michigan football isn't a team" bet loss, and I gotta say... it hasn't been awful. Outside of being on the outside looking in at Buffalo Joe's and Buffalo Wild Wings, it generally drives me to more exquisite meat (steaaaaaaaaaaak) or healthier meat (feeeeesh). That said... still gonna house some wings whenever these seven weeks finally end.

Nebraska at Michigan (19): I don't mind Nebraska, but you do, so you'll love this.

Nebraska is treating their game against Michigan like Rocky

Michigan is Drago, according to RB's coach Ryan Held.
pic.twitter.com/5QUPzKjjLB

That was 14 seconds too long.

Also, this dude seems noble, but I got tired just thinking about his life.

"Leave it or take it" was a nice flip, though.

Boston College (23) at Purdue: Man, we talked about this before, but I got re-fixated after these tweets.

Fifty years from now I will still be thinking about how absurd Darrell Hazell's hat brim looks. pic.twitter.com/cKPlaXUI2E

Even in the cold that's a crazy move. pic.twitter.com/sL2lTqeCsF

Buffalo at Rutgers: Is it possible Rutgers' coolest play of 2018 will be in a bad, bad loss to Kansas?

I love this game so much pic.twitter.com/XyNPMmuH9a

Jimbo Fisher: "I love Southern Cooking, I can't give it up"

Me: "Would you go full Vegan for a year if it meant you beat Bama this weekend?"

Jimbo: "ZERO doubt. I love winning too much to care about food"

Question, would you go Vegan for a year if it meant a win for your team?

Clemson (3) at Georgia Tech: Ah, one of my favorite Hybrid moments of the year: Clemson Tom mocking the triple option.

The Tigers travel to Atlanta to take on Paul Johnson and his 1932 style offense. For reasons unbeknownst to me, the Georgia Tech players have been trash talking our defense. Yeah -- what moron is doing that? Our defense is the best in college football, and we keep shutting down GT and their god awful offense each year. The triple option doesn’t work, Paul -- stop being an idiot! Also why does his face look like he just pooped his pants? I hate GT for their arrogance and stupidity when it comes to college football.

Tulane at Ohio State (4): Do you want to vomit or piss on this?

Ohio State could teach Tone Deaf 701 classes at this point:

Laura Wagner went in earlier this week, too.

In an interview with ESPN, a Twitter statement, and a rambling press conference, Urban Meyer made it excruciatingly clear that he is still missing the point.

In a sitdown with ESPN’s Tom Rinaldi on Saturday, Meyer said he was speaking now because he wants the “truth to be out there.” Then he promptly tried to obscure the truth about the issue at the heart of the matter: what he knew about the abuse allegations and when.

Lying, or “misspeaking,” as Meyer repeatedly characterized it in his press conference today, does indeed have a way of making people question your honesty. And now, surprising no one, Meyer is painting himself and his program as the real victim here. He says that he’s “truly sorry” for the fact that people lost faith in him; he is explicitly not saying he’s sorry for ignoring domestic violence.

Painting himself as the victim? That is not the Urban we kno--wait yes, that's him exactly.

“[During the investigation] I sat in my house and stared at walls for two weeks and it was awful. I was exhausted. And obviously very emotional that I was suspended, I had never been suspended, and then I walk in a press conference and cameras are going, I start getting rapid-fire questions at me and I did not do well, again, at that scenario.”

The true, ultimate, bread and butter is actually the next Urban quote, which I have just below The Contract and just above "This is history" on the all-time egregious list.

“Ever since I began as a head coach and even in more recent years, I would say every other day this is very strong—last night I talked to our team about it. We have power unit messages to our players every Thursday and I talk about domestic violence Title IX respect. When I say the word Title IX, our players respond back to me: ‘Respect.’ That’s how serious we take this. This is something that is constantly have conversation. It’s not uncommon for me to send a text message out on a Friday or Saturday night that says, ‘Remember, Title IX equals respect.’”

Me, when he first used the phrase "Title IX / Respect": 99.999999% that's a lie this is insane why is he doing this why is he this way this is like sitting in the middle of a room that's on fire and holding your position for literally no reason while you are burning alive, but... maybe? maybe, in this slight, barely possible way, there is no fire here

Me, when he pushed it over the top with the txt message part:

What a damn batch of meaningless nothing. If someone routinely hit me up on Saturday nights and said "Air / KEEPS YOU ALIVE", I might just hold my breath forever.

All this current horrible is making me miss older horrible.

There he is! Sadly, current horrible reigns.

Gene Smith handed over a phone that contained no texts! https://t.co/IbTYW5b1EM

Kansas State at West Virginia (12): Looks like the early returns on "Is Will Grier gonna be a thing?" are "uh duh". He's got 9 TDs, 1 INT, and 76% completions through two games. Before you ask, one was against Tennessee.

Virginia Tech (13) at Old Dominion: Still unsure how Power 5 programs end up visiting smaller schools; not remotely opposed... just seems like they'd be dicks about it.

Northern Illinois at Florida State: Mia Khalifa started a GoFundMe to buy out Willie Taggart's $21.2 million and send him packing. Do any of you wanna guess what it's at? I'll guess, too.

McNeese at BYU (25): Coulda sworn McNeese had a "State" after it. Are there two McNeeseseseses? Regardless, the chocolate milk was flowin' in Provo last weekend.

BYU bench getting in on jump around. Cocky move. pic.twitter.com/Mc6ACbuOzh

Leave it to Wisconsin to equate dancing-while-hyped as "cocky."

Also, give me three Tanners vs. that field, all day.

Actually, throw Riggs in there as well. We could definitely use a Riggs.

Texas, meanwhile seems to have it all figured out.

Army at Oklahoma (5): I don't think I saw a single Kyler Murray highlight last week, but this was faint-worthy.

Dantonio says MSU "came up short" at Arizona State but he felt the Spartans "conquered" the heat and time change.

Michigan State on a roll, they may have Lost to Arizona State but beat the powerhouse Heat and Time Change University followed by Bye Week A&M

Explain to him what conquered means

You underestimate the power of the Duck Slide. pic.twitter.com/p5Gswf3h8f

You still picked David Shaw?! Was it because they used big numbers again last week? I mean, everything else was pretty fuckin' sleek.

Wisconsin (18) at Iowa: Sure, I was mega stoked when Bucky lost to BYU, but yeah, it took luster off this game. I've moved past it. Sure, a win over a single digit ranked team would look quite fine, but I'd rather get 'em while they're weakened*.

Arizona State at Washington (10): No time for you, Washington. Not just this week -- I meant ever.

These blocks are supremely disrespectful. The San Diego St RT might have murdered this safety. And the LT gets himself a nasty as well. This is impressive. pic.twitter.com/vSOle7O5mo

Sure, Urban Meyer now makes $6.5 mil a year in real money, but can you even put a price on his 2012 family contract? pic.twitter.com/BGEBmJpnTy