We have a charity.

Domestic Violence Intervention Program (DVIP). Thank you all for the submissions via Twitter and the comments last week. I picked this one because of its local focus:

The Mission of the Domestic Violence Intervention Program is to provide comprehensive support and advocacy services to victim/survivors, focusing on immediate and long-term safety, empowerment, dignity, and hope. In collaboration with the community, we strive to end domestic abuse through education, accountability, and social justice.

I just donated $100, and you also can here. Please send a screenshot/email of your donation -- @bobbystompy on Twitter or bobbyloesch [at] gmail.com -- if you would like to be featured in Ohio State's section in perpetuity for the rest of this season. Because you know who won't be. We'll set a final goal of $1,000.

Special thanks again to Nerdhawk for the entire idea.

"'Nice' is basically one step above saying 'I hate you'."

Utah State at BYU: There will be no chocolate milk case.

Alabama (1) at Arkansas: Ain't no trap game, Sabes. Also, is he making a good point here?

Nick Saban is not a fan of upperclassmen using the new redshirt rule to transfer during the season: https://t.co/dp3RMQBmdJ pic.twitter.com/gr3hjl1VZj

Thought yes originally, but the answer is probably no. I'm assuming he's complaining because of Clemson/Kelly Bryant (his No. 1 competition at this point) or dudes getting fed up with a glaring lack of playing time in the Tide's rampant 5-star system. Sure, it doesn't sit great with me, but if the older players want to take advantage of a rule the NCAA created -- while they continue to not be compensated -- I don't see the problem at all.

That said, Kyler Murray threw a screen pass where the guy YAC'd for, like, a 60-yard TD, and my first thought was "Kyler Murray HELL YEAH" (as if he did anything). This is why we can't have nice things. 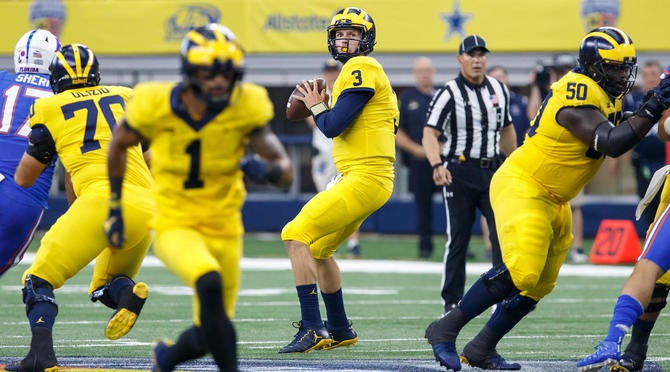 What would it cost your employer in lost productivity if you had to call-in sick this week, Darren? #GoBlue https://t.co/kpfWyq4Psg

Penn State: If you thought for even a second you'd be getting off the hook due to your bye week, you were as wrong as this play call.

Here's what Penn State went with on 4th and 5 with the game on the line. pic.twitter.com/onhYZGP2RH

Why the hell did you take the ball out of McSorley's hands?! Just when you think you can trust weirdo James Franklin.

A draw out of shotgun on 4th and 5. FRANKLIN WHY.

I felt like OSU had 17 guys walked up, showing blitz on that last play. All I could think was, will he get this slant pass off before he gets drilled? Franklin thought to run into that apparently.

Even this Franklin handled it better.

So yeah, trade us this guy.

"THAT'S CATCH OF THE YEAR THROUGH WEEK 5!" #SCtop10 pic.twitter.com/rviOfPCONI

Northwestern at Michigan State (20): In my head, Brian Lewerke is running for 11 yards on third down speed options perpetually.

Illinois at Rutgers: Was Illinois off last week?

Rutgers was off, too.

Northern Illinois at Ball State: Wait, is this field real?

Did you witness that garbage team from up North trying to take out my quarterback? I officially am going on the record saying I hate Syracuse.

If you want to win some easy money, go ahead and put it on my Tigers beating Wake Forest.

I've been on fire so far with my football picks, only losing two all season. Follow me on Twitter @ClemsonTom.

Florida pulling out the with the Jordan Retro XI cleats for their matchup against LSU this weekend. (via @GatorsEquipment) pic.twitter.com/gXt3LISOBn

Florida State at Miami (FL) (17): Instead of asking "Was Jimbo wrong?" let me posit a different question. Would you rather play for this team?

Jimbo is not pleased. pic.twitter.com/JMvlk9zDEb

This is a first ballot entry in the Bad Throw Hall of Fame. pic.twitter.com/Bkf3DAcX7v

Haha, the maniacal laughter is so good.

In case you are not watching this game (and you should not be): Miami just called a timeout after returning a pick six to give their defense a rest because they were winded FROM RETURNING SO MANY TURNOVERS FOR SCORES

San Diego State at Boise State: We've all seen cool one handed catches, but this one had an unmatched casual fluidity.

John Hightower only needed one and one to make this catch

By a touchdown! Are we a real team again?

/thinks hard on it

Indiana at Ohio State (3): Dwayne Haskins had one of his worst games of the year against Penn State (a season low 56.4 completion percentage)... and still threw for 3 TDs in an epic road comeback.

Arizona State at Colorado (21): I can definitely fuck around with undefeated Colorado.

SMU at UCF (12): Do we want UCF playing Clemson or Alabama in round one of the Playoff?

Us after a college football Saturday: pic.twitter.com/OMutnMgFyT

I will not photoshop this man. He has Ennui Huskyd his very soul. https://t.co/sQSgv67QWL

UConn has won the toss once this year, of course they took the ball
UConn has lost the toss 4x this year, their opponent deferred on all 4

Randy has a coin toss hustlehttps://t.co/WXLRXPShhQ

Vanderbilt at Georgia (2): A lot of good responses to my cake eater inquiry last week. Not a lot of love for Edina, though. I am from Naperville and've always considered that the Edina of Illinois. Overland Park, Kansas, has also been on that same plane. What's the Iowa equivalent? West Des Moines? Yay? Nay? Anything closer to Iowa City?

Notre Dame (6) at Virginia Tech (24): Can't let myself get excited. ND is probably favored by a touchdown.

Washington State at Oregon State: Wazzu won a tight one against Utah last week, and you're right, it doesn't matter, but the game winning TD was so sick, I'm telling you (2:40 mark).

tfw Iowa football is back

TUESDAYS WITH BOREY: Quoth the Raven