What positions did you picture in this hypothetical? I'm thinking a Jonathan Ogden-type at OT against an undersized DE with considerably less melanin.

Still gotta win that battle, though.

"There are no heroes in the room"

Marshall at Boise State (24): Kinda cool a true freshman QB took out Florida State at Florida State. It always stings worse when it's a true freshman. The announcers might as well say "That's right, folks -- he's a true freshman! Not only is he so young to barely know what the fuck he's doing, but he basically fell backwards into this uniform, has been on campus for two weeks, and supremely does not know what the fuck he's doing! I mean, a redshirt freshman would also be bad, but this is definitively worse! Your team is shame."

Army at Michigan (7): Michigan is spreading it out, which is good. Their tempo... still lacking. Their two QB package where one guy rocks a receiver glove on just one hand and tries to catch weird short passes... woof.

The brightest spot on offense was probably true freshman RB Zach Charbonnet (of my Big Ten only college fantasy football team). M fans are JOing majorly to him going nine for nine in pass protection, but real ones, like me, are mainly happy he has the potential to be actually good at football.

Also, no idea if this was from last week's Army game or not and went out of my way not to research.

Rutgers at Iowa (20): Gambling is legal in New Jersey, but you cannot bet Rutgers there.

You cannot bet Rutgers there.

Also, I ate the tape on Iowa-Miami (OH)*, and here were the quick hit thoughts txt'd to my buddies Ryan and Chris.

- We throw a ton of fades now!

- Stanley remains an awkward bobblehead of a player; there was a read option he converted for nice yardage that still made me feel like shit

- Both of Gabbert's TDs were sick fucking passes

Syracuse (21) at Maryland: This getting dragged restored my faith.

Vanderbilt at Purdue: Rooting for Purdue, even in better times, remains as bad as ever.

Nevada true freshman Brandon Talton nails a 56-yard FG to stun Purdue on the final play of the game pic.twitter.com/ECnq7kPKR6

Maybe this Jeff Brohm XFL video can ground us.

I think about this a lot pic.twitter.com/sEFx3HUbZ3

Northern Illinois at Utah (13): The Hugh Freeze story -- and ensuing mega memes -- woulda been a lot cooler if it was, you know, anyone but Hugh Freeze.

(Clearly got nothin' on this game.)

Tennessee Tech at Miami (OH): Saw this right before going to bed and really thought Vint was maybe serious here.

A Miami assistant was just explaining the Soulja Boy dance to the offense. pic.twitter.com/fEnOA2Vnse

I told you last week we'd put a hurting on the boys from Georgia Tech. This week, we have Jimbo Fisher and the Aggies from Texas A&M. Now, I like Aggie fans -- I went there last year, and they are 100% Southern hospitality. But I can’t really understand how they do those cheers because they dance around like little Cinderellas on pixie dust. It’s odd man, seriously.

They’ve had a few players this week talk some trash saying they’re going to roll into Death Valley and put a hurting on my Tigers. So go ahead and put some money on Dabo dropping the hammer like Thor did to Thanos.

Ass whippings are gonna happen Saturday afternoon in Clemson, and the Tigers are handing them out. Come get some, Aggies! Y’all run your mouths like y’all didn’t catch an L last year.

Clemson is a 17.5 point favorite, so please do not let the early season rankings trick you.

Central Michigan at Wisconsin (17): It is so hard to appreciate this dude. Am I the problem?

It took less than 5 minutes for Jonathan Taylor to find the end zone pic.twitter.com/f9Nr51sAGb

Nebraska (25) at Colorado: Heavily debating backing down from my pre-season Nebraska optimism, but that would make y'all happy, so I won't.

...but that was because I forgot about fellow Neuqua Valley High School alum Donny Navarro transferring there from Valpo to play WR. While he didn't register a catch, he did win Special Teams Player of the Game.

#Illini Players of the Game | Week 1 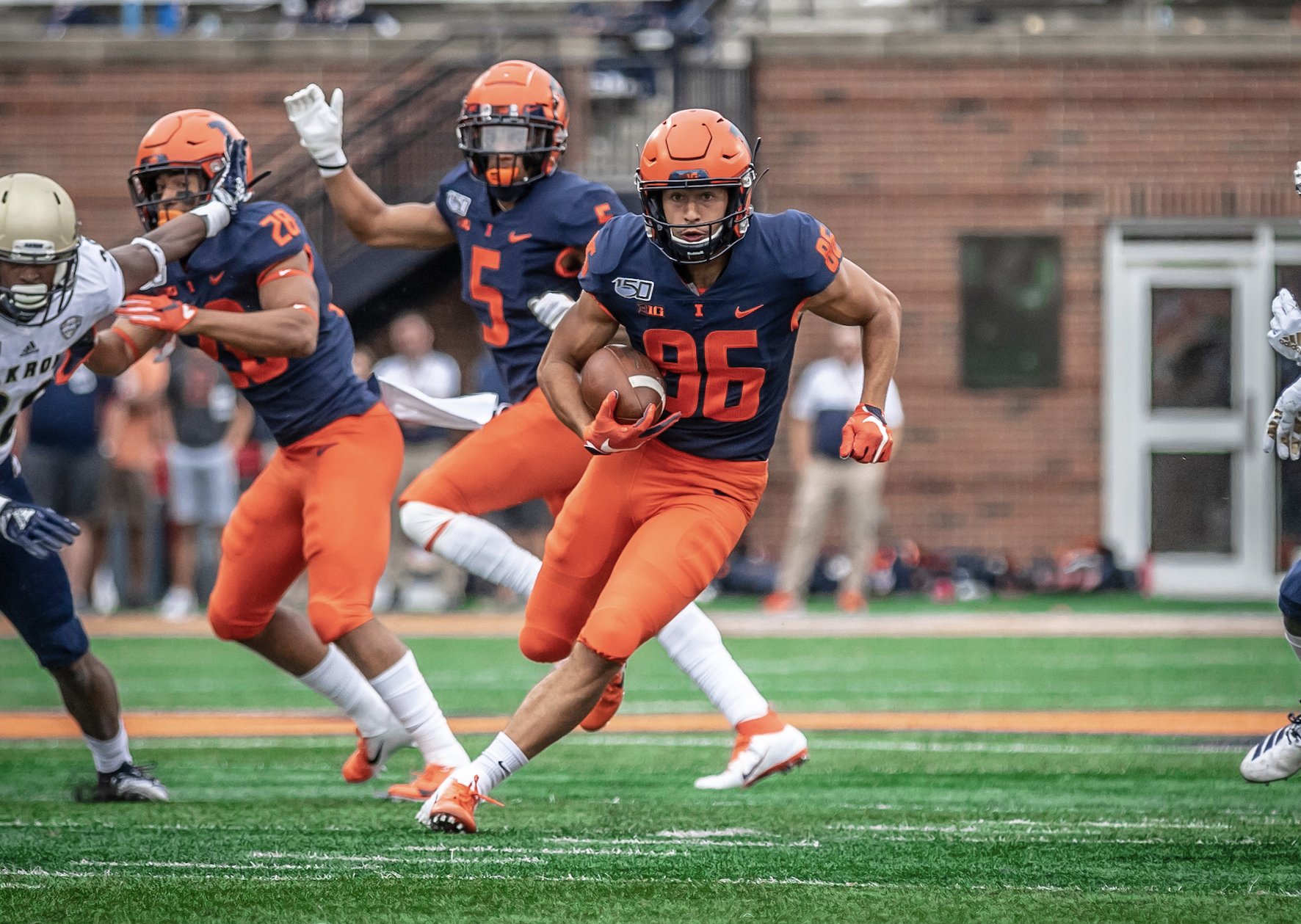 'Ol' Crazy Arm' Peters moves to No. 2 on the Illinois favorites depth chart.

New Mexico State at Alabama (2): Still not totally used to that No. 2 ranking. Those poor have-nots in Tuscaloosa.

Nice coordination between the play card and the Bottomline here pic.twitter.com/Bj3iqegVAt

Murray State at Georgia (3): Did Georgia even play last week?

San Diego State at UCLA: This isn't even, like, funny -- it's flat out true.

Nick Nolte is on the UCLA staff? pic.twitter.com/hGh1x2Oo2M

Northern Colorado at Washington State (22): A big chunk of my job writing this column is getting y'all up to speed on whoever is calling signals for the Cougs. So let's meet our man.

Someone just asked me to identify Anthony Gordon in pregame warmups.

The TV crews dont know what he looks like.

If that doesnt encapsulate Gordons story, Im not sure what does.

He's a senior. I think redshirt. Literally the farthest one can be from TRUE FRESHMAN status, but that's OK. Will try to learn more soon.

You know it's good when Hurts is by far the weaker part of that name combo.

"TODAY'S GAME MEANT MORE TO US!"

Georgia State was hyped after their win over Tennessee pic.twitter.com/031if2xj8U

Coach O, take us out.

Tonight, Nix threw the game-winning TD to lead Auburn to a come-from-behind victory over Oregon as a true freshman. pic.twitter.com/8TZlVXtA8U

Wonderful call by Fowler as well.

AUBURN WITH THE GAME-WINNER!

Buffalo at Penn State (15): What do y'all think of new PSU QB Sean Clifford? If he's good, my "I hope they fall into a pit" plan could be nixed for the time being. They put up 79 against Idaho, but he only had two of those touchdowns, as it looked like they kinda manged him.

Dantonio: "Football is a game of effort, toughness and knowing what to do. Half of our team figured that out."

I wonder if he means the offense or def--

It very well could be the offense. Well, if Dantonio can get his inferior unit to start holding up their end of the bargain, I'm sure all will be right at MCU soon enough.

Prairie View at Houston: This is where it has to be asked... could we play QB with this type of coverage?

Houston's DBs are over there, just out of frame, laughing and having fun pic.twitter.com/L7Ds1pvYhg

Also, this should have been in the Texas section, but I wanted to connect the incompetent DB momentum into a little train.

Nooooo!!! Ya cant celebrate while your man is running with the ball. Texas cornerback showing his youth there: pic.twitter.com/YrA7tmrqUo

This is also exactly what I would do, for the record.

Stanford (23) at USC: Who should we make fun of first?

PUNT FROM THE PLUS 34 BY STANFORD.

As for the Trojans... first, a moment of silence for J.T. Daniels and his knee injury. Haaaaaaaaaate losing good QBs.

Ain't nothing but a [redacted] thang, bayyybay

An even better rap lyric for the occasion. I really love the announcer telestrating our new G into the wrong spot.

You are the beavers, and you celebrate machinery that performs the function of your mascot far more effectively and efficiently?

No Zybrid this week with Notre Dame on bye, but here was the dumbest tweet I saw all weekend.

You know what is sad? Internet outrage culture has made me afraid to say that I think the ND mascot should always be a midget looking ginger. So Im just not gonna say it. pic.twitter.com/Xr4MnjVdsB

That guy can triple space his way right off a cliff.

Told you college football was coming for all the blood.