BREAKING: NCAA will permit athletes to be compensated for their names, images and likenesses, Board of Governors says. https://t.co/4rLzgF127e

We live in a world where everything, at all times, always, is a BIG DEAL, and I gotta say, I'm a little blown away this dam-breaking news didn't get more ink this week. Where is my Offspring?!

If you want something less that, how about some RiRi?

The amateur athletes finally did it. They used their leverage to get the dumb NCAA to let up, just this once. This is logical, this is progressive, this is the future. Is the sport still bad? Of course. But 20 years ago, we didn't have this or even a 4-team playoff. It's always, always baby steps with this horrible institution.

It really speaks to the free market and how change can come fro--OHHHHHH, WE GETTIN' THE GAME BACK.

Probably football, but you get the idea.

"Last words are usually as significant as first words."

West Virginia at Baylor (12): We've slept and slept and slept, but the Baylor Bears are knocking on the Top 10's door. They're also playing, as of right now, one ranked team the rest of the year (haha). Less haha: that team is Oklahoma.

But not this week!

Georgia Southern at Appalachian State (20): Last week, we outlined a (still alive) scenario where Michigan and Appy State could potentially play in a bowl game. Even less interesting: they're actually playing in basketball this year! Tickets can be ours for six dollars.

After dressing up as the TV characters for a Halloween party...


...my wife and I watched the "Friday Night Lights" movie this week. Despite loving the show, it was her first time seeing the film (my third). She... did not like it as much as Riggins, Saracen, and the rest.

Per her, it was a lot more football-heavy, super light on female character development, and Billy Bob simply couldn't match the pull of Kyle Chandler. That said (SPOILER ALERT), there was nothing quite like her audible "They lost?!" reaction when Permian couldn't break the plane in the state title game. That said, I wanted her heart to break even more when Tim McGraw slipped championship ring on his kid's finger as he was walking off the field, but worry not, mine still did.

Absolutely love the day after a big UM win. I consume any and all content about it. I dont care if its some 12 year olds Xanga page with a game recap written in unreadable hot pink on a white background Ill highlight the text just so its readable and voraciously read it

He types everything in Excel? https://t.co/cUWZiAxbN2

And, in some ways, physically.

What are we doing? pic.twitter.com/SVPcdP8IVv

Nebraska at Purdue: /pretending to be a serious pundit for a game I don't care about

Alabama: Bama is off this week, presumably on a come down from the designer drugs required to fully enjoy their in stadium experience.

And no more ND-Michigan for... a lot longer.

Criminal what is happening over at Deadspin. Has been an essential read ever since Kyle Orton got hammered in Iowa City and they procured the photos. Drew Magary is one of my favorites to ever do it, David Roth on Trump is its own genre of writing, Giri Nathan held it down on the tennis coverage, and their headlines/leads should leave us all wanting to be better. A (less serious) sample: "Julian Edelman Was Horrified By The Sight Of Bill Belichick's Dick And Balls Emerging From A Hot Tub".

To see them go from a Will Leitch-led thorn in ESPN's side to an athlete dick pic haven to a Left-leaning Barstool-fighting hub of quality writing has been surreal. Sports blogs existed before Deadspin, but they were the pioneers who actually lived. But now they don't. And to anyone who came up in the 2000s -- or even right now, honestly -- it feels extremely significant.

Georgia (8) vs. Florida (6): Ehhhhh. Very reluctantly giving this Game of the Week status. How is dumb Florida still ranked so high?

Butler Community College: Legit had to look up where Stephen Jackson went to college, solely to post this totally unrelated to CFB clip because I liked it that much.

Stephen Jackson is STILL not messing with Derek Fisher and Tony Parker *NSFW*pic.twitter.com/tzZ1L0N7fp

WHO'S THE NEXT VICTIM.

More related to college football... does someone wanna look through this and see if there is anything funny?

Curious who are the favorite musical artists of all 130 FBS coaches & the 10 conference commissioners? Wonder no more. Here are your answers from @Stadium https://t.co/lF7djcG12o

...and on the other side of the spectrum.

Also, before anyone does, I already looked up David Shaw, and it's Sade.

This has 92 million plays on Spotify and an additional 54 million on YouTube... yet, I really do not think I've heard this song before. That said, picturing Shaw head bobbing to it while diagramming new and exciting punt angles is a real joy.

Liked this finish to the press conference from Kirk Ferentz.

Its just me. But if you can only choose one thing, you start on defense. Any sport. If you can play defense, youve got a chance to win games. Im OK with that. And Im OK if we score points, too."

We root for a team where the coach is just "OK" with scoring points. It explains so much.

Rutgers at Illinois: Illinois is gonna god damn do it, aren't they? All it really takes is one big win to cause a shift, you know? They knock off Sconnie, beat a depleted Purdue team (which looked like a nightmare matchup in the preseason), and now they're one Rutgers win away (guaranteed?) from being one win away from bowl eligibility. Unreal.

LSU: Joe Burrow becoming even more of a favorite.

Wish I could say this was a flop hes just a much larger human than myself https://t.co/G5pbUlU2qg

Also just noticed he goes by "Joey" on Twitter... as a fellow immaturely named 'y' guy -- I'm in! JOEY BURROW, LET'S GET IT.

Wofford at Clemson (4): Clemson Tom checks in before the Tigers take on their fiercest opponent yet.

I never thought that we would finally put it all together like we did Saturday night [ed- so it was just bravado?!], but then again, we kicked somebody’s ass.

We are finally hitting our stride and playing like we should’ve been playing in September. Our running back averages over 100 yards with a bunch of TDs, Trevor Lawrence is finally acting like Trevor Lawrence. And don’t even get me started on the defense - during the Boston College game, they outscored the BC offense.

People keep asking how we were going to reload after losing our D-line last year. The answer is very simple -- we have the best defensive coordinator in the country, and he recruits the best athletes for his system. Isaiah Simmons should win the Heisman Trophy. That’s not even a question. That’s a statement. The kid is the best player in college football right now.

Don’t start none, won't be none. However, we got a few more games left that we’re gonna whip everybody’s ass. Can’t wait until the College Football Playoff -- putting y’all on notice.

FYI - Notre Dame is consistently overrated and sucks every year. Oklahoma too.

Iowa State (not really): Oh man, what an incredible run by this Okie State guy.

I'm not a Cyclone hater, but because most of you are, we can also take a second look:

Utah (9) at Washington: when you think Utah is fully out of the national title picture but look to your left and see them continuing to hold a single digit ranking

Ole Miss at Auburn (11): Saw this awful-but-watchable ESPN doc on the SEC. The concept was they got celebrity fans to talk about the unique bonds to their respective schools. A lot of "No, you don't understand. There is nothing like Mississippi State. We tailgate in parking lots here. COWBELL COWBELL COWBELL."

Every team was covered (even, like, Vandy and Mizzou). Most surprising: for Alabama, they got Melissa Joan Hart. 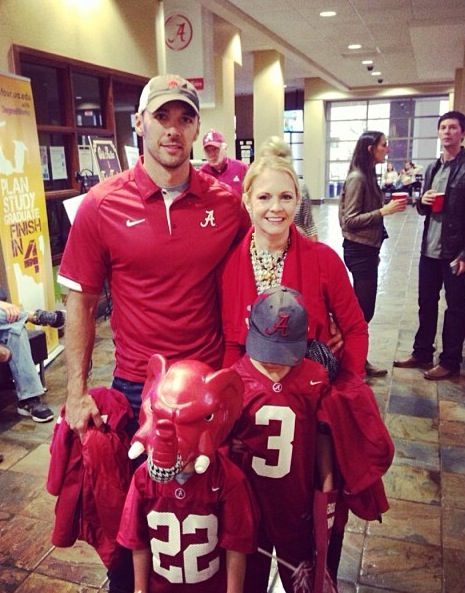 The rest? Well, I'll let their PR description break it down:

What do Ashley Judd, Darius Rucker, James Carville and Governor Rick Perry have in common? Well, they live and die with the fortunes of their respective SEC schools. In "The Stars Are Aligned," 14 famous figures-each representing a different college in the Southeastern Conference-spill their emotions and explain why they'll never forget where they came from. Among the other celebrities featured are Charlie Daniels, Amy Robach, Jonathan Papelbon, Melissa Joan Hart, Emmitt Smith, Shepard Smith and Ralphie May.

/realizes I'm in the room alone

What about him blowing off your own journalist did you appreciate? https://t.co/v4vU7Gr4uz

Boise State (21) at San Jose State: Wait, Boise lost to BYU last week? The chocolate milk was flowin' in Provo, and no one told me?!

Theres gotta be a name for this play. pic.twitter.com/1B9sIS5xTM

Iowa 26, Nebraska 20: If You're Happy And You Know It, Clap Your Hands