I see that Dallas is a first and second round site for the 2021 NCAA tournament.  Maybe you'll get lucky and we'll get assigned there.  Obviously, you'd still have to buy a ticket, but that might be easier than trying to get back to Iowa City.

You, my friend, need to find your way to a game for next season.  It could be a great one.

First - I can't say what my first game was, but I went with my dad to a few Gazette Hawkeye Challenges.  So it was probably one of those that was my first game.  My earliest memory of seeing Iowa players in person was on the seniors' annual off-season tour.  For those who don't know about it, the outgoing seniors used to go on a tour of the state, playing in high schools with and against locals in a full court game.  This ended, I believe, with Tom Davis leaving.  My earliest memory of this would have been when Roy Marble and B.J. Armstrong were on the tour in 1989.  I assume Ed Horton was also there, but I don't remember.  The reason this sticks out for me so strongly is that Roy broke one of our high school's backboards, shattering the glass completely.  I don't know how long it took, but the game was paused while the school staff replaced it with one of the boards from the side of the gym.

Last - I wasn't able to make it to any of the conference games this year, so my last game was the SDSU game in Las Vegas.  Both of the games in Vegas were memorable and gave me the first inkling that this season was not to going to go as expected.  First, it was pretty clear Jordan wasn't going to be able to play the full season.  More importantly, we showed some flashes of brilliance against some good teams.  Additionally, we sat close to the Garza contingent and had a chance to talk to Frank briefly a couple of times, which was fun.

Best - Sadly, I haven't been able to see too many big wins in person.  However, I think my favorite game was the first round NIT game against Dayton in 2012.  It was our first post-season game (outside the BTT) under Fran, and the first for the school in quite a few years.  The best part was getting to be there for Matt Gatens' last game in Carver and to see him finally get a little payoff for his 4 years of hard work for the team.

Worst - I think the worst I've felt at a game was probably when we played Duke at the United Center in the 2001 Big-Ten ACC Challenge.  We were #7 after almost winning an opening tournament in KC.  We beat a ranked Memphis team and almost beat a top-5 Missouri team (who we later destroyed in Columbia when they were #2).  Duke was #1.  We were so excited to see a great game, but ended up watching Duke just outplay us completely.  It was a long drive back to Iowa City (I was a student at the time).

the only unanimous selection among offensive linemen.

Joe Thomas was unanimous at tackle. :)

This seems fair.  It would take at least a couple of minor surprises (by denying PSU some bonus points) or a pretty significant upset for this year's team to take down that 2019 PSU lineup.

The still of John really catches that point.  All those people are sitting there watching a D-III (NAIA?) "athlete" make a circus layup.  It maybe felt like a Globetrotters game?

That's funny, because John was overheard saying that he felt lucky not to be matched up against Cook.

You know what strikes me most about that video when watching it a second time?  The crowd, despite the poor product on the floor, was actually quite good.  It makes me sad to think about how the Lickliter years eventually managed to strangle a good portion of the fan support built up over the prior decades.

I don't think Little Lick will make it through to round 2, but we'll always have Purdue: 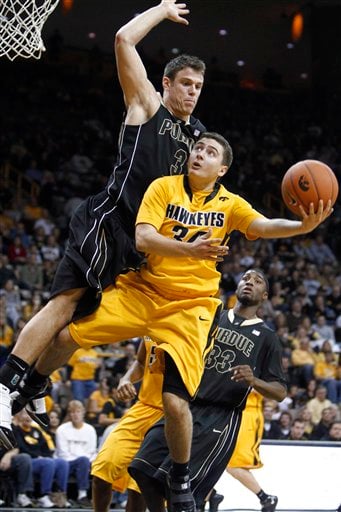 Reading your Worst list made me angry and sad at the same time.

My deciding point on the Boyd/Baer matchup was whether I believed Brody would even be able to get any clean looks.  The guy is small (listed at 5'11, but definitely not that tall) and Baer is a good shot blocker.  With a listed 8 inch height advantage, I don't see a likely scenario where Brody can score that much.  So I take Baer by 5+.

I think it's fantastic that your first game was Hayden's first game.  I'm sure there were a few others like you, but there may not be any others that are readers on here.  Thanks for sharing these memories.

Now we have background on your handle, too!

Maybe I missed something, but if you were at the Rose Bowl, the Insight Bowl wouldn't have been your last game.

It's interesting to read perspectives from those "new" to their fandom (or at lest new to games in person).  You have been fortunate to miss out on some of the worst experiences a lot of us have had.  But you've still seen some of the same great games as many of the rest of us.

It looks like Akrum spent much of the 30th retweeting photos and videos of people with their gear.  I'm hoping all is on the up and up with him.  Also, it may be that his mom may be dealing with a health issue (no details) because Akrum is asking for prayers, as of today.

First - I don't remember when the first game was, but I started going to games in the late 80s.  So I didn't get to see the peak years for Hayden, but got some pretty good ones.  I think the first full season I can remember is probably 1988 or 1989.  I remember the 100 years of Iowa football logo they had on the field that season.

Last - Illinois this past year.  I have season tickets and didn't go to the bowl game this time.

Best - 2005 Capital One Bowl or 55-24.  The Catch is probably my single favorite in-person football moment (followed closely by the opening kickoff of the 2003 Orange Bowl and the long TD from CJB to Tevaun in the B1G Championship).  But 55-24 was just awesome the entire game, and sharing it with ~70,000 of my closest friends was something I'll never forget.

Worst - I think my least favorite experience was the 2000 Eddie Robinson game against K-State in KC.  The team wasn't very competitive and the heat was absolutely brutal.  We were buying bottles of water and pouring them over shirts, which were draped over our heads and shoulders.  That's probably the worst I've ever felt at a sporting event.

I'm not here to disagree with you or the article.  But comparing the Olympics to the NCAA is challenging.  I don't see a lot of similarities beyond the fact that they are based around athletic competition.

Please feel free to reply to enlighten me on your comparison.

Okay, so I didn't think through my joke that well. :)

He can lose if he gets multiple flagrants for eye pokes and gets disqualified.

In a close call, Jarryd got my vote due to a personal bias.  I happened to have run into Jarryd a couple of times and found him very approachable and polite.  I haven't met Mike, but I admit he might be a very similar person.  Additionally, though, Jarryd gets an extra boost for his loyalty to the school and team.

I think the Hansen would probably beat Woody just based on attrition.  I think Woody fouls out after about 45 minutes with the score somewhere close to 10 for each player.

This looks like fun.  That darn selection committee really screwed up again on the seeding! ;)

I dislike that the Wooden award vote makes you vote on Twitter.

Thanks for posting.  Any positive news needs to be shared. :)

I think reading this actually made me more depressed, unfortunately.

Tell Us About Your Iowa Basketball Game...